Radical thymectomy is the gold standard treatment for resectable thymomas, with completeness of resection representing the most important prognostic factor (1). Currently, median sternotomy is widely considered as the standard approach for thymoma resection at any stage, allowing a technically easy and oncologically safe operation (2). While the video-assisted thoracoscopic surgery (VATS) approach has been extensively used for mediastinal diseases in the last three decades, it was mainly confined to the treatment of several benign diseases or to thymectomy in cases of non-thymomatous myasthenia gravis (MG) (3-5). The first VATS approach for thymoma was described in early 1990s (6); since then, only few authors have published small series of VATS thymoma resections with short-term follow-up, leading to a paucity of clear and sound data about the effectiveness of this approach (2,7-9). Consequently, a number of surgeons are still reluctant to use this surgical approach that remains controversial—the supposed increased risk of local recurrence (due to reduced safety margins after minimally invasive resection) and the possible rupture of the capsule with implantation of the tumor during endoscopic manipulations are the most common arguments against the VATS approach. Furthermore, the lack of long-term oncologic results, the learning curve required to perform this operation safely and the relative rarity of this tumor are additional reasons that slow the adoption of the VATS resection for early stage thymomas (10). The introduction of robotic-assisted technologies in the late 1990s provided a technical advancement able to overcome the limitations of conventional thoracoscopy. Specifically, the three-dimensional vision system and the articulated instruments of the da Vinci Surgical Robotic System (Intuitive Surgical, Inc., Sunnyvale, CA, USA) allow for an intuitive, ‘open-like’ intervention, but with minimally invasive access. The application of robotic technology has been tested in a variety of thoracic surgery procedures, particularly for mediastinal diseases, where the robotic system is thought to provide the maximum benefit (11,12). The aim of this study was to evaluate the safety and the feasibility of robotic thymectomy, analysing the oncologic outcome in a group of patients with clinically defined early-stage thymoma, in four European Centres with extensive experience in this type of operation.

We reviewed the data of 134 patients undergoing robotic thymectomy for clinically defined early-stage thymoma (Masaoka stages I and II) collected between 2002 and 2014 by four European Thoracic Surgery Centres (University of Maastricht-Nederland; University of Padova-Italy; University of Pisa-Italy; University of Innsbruck-Austria). All patients signed a detailed consent form in which they were informed about possible complications of a thymoma resection with robotic approach and the lack of long-term data. The institutional review board of each centre approved the study. Information on patient demographics, presence of associated MG, tumor characteristics, stage, intra and postoperative data (e.g., complications, need for open conversion or additional ports or accesses, operative time, length of hospital stay) were collected. The Masaoka staging system was used to assess the pathological stage (2), while the new World Health Organization classification was used for histological definition (13). The Myasthenia Gravis Foundation of America (MGFA) classification (14) was applied to stratify the preoperative class of MG. Preoperative assessments included evaluation of pulmonary and cardiac functions, total body computed tomography (CT) or magnetic resonance imaging (MRI). Preferred radiological characteristics to be eligible for robotic thymectomy were the location of the tumor in the anterior mediastinum, a distinct fat plane between the tumor and surrounding structures, unilateral tumor predominance, tumor encapsulation, existence of residual normal appearing thymic tissue, and no mass compression effect (Figure 1) (7). In cases of unexpected intraoperative finding of involvement of surrounding structures (Masaoka stage III), pleuro-pericardial or pulmonary nodules (Masaoka stage IVa/b), the robotic approach was converted to an open approach if the resection was considered technically difficult, unfeasible or unsafe for the patient. Patients were followed up until death or May 2015, if alive, by periodic visits (with neurologists if affected by MG) and phone contact. A total body computed tomography scan was performed every six months for the first two years postoperatively, then every year. There were 61 (45.5%) males and 73 (54.5%) females, with a median age of 59 years (range, 14–88 years). Seventy (52.2%) patients were affected by MG. 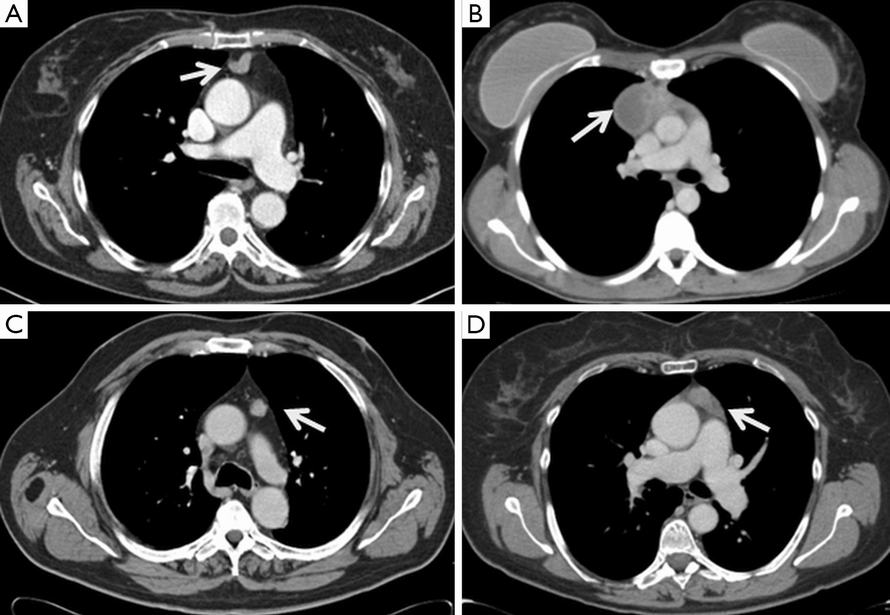 The side of surgical access was based on a single surgeon’s experience, or occasionally on the presence of unilateral tumor predominance. The surgical technique of robotic thymectomy from either the left or right side has been described in existing literature (15,16). This procedure was performed differently from thymectomy for non-thymomatous patients, with all surgeons adopting a “no-touch technique” for an “en bloc” resection of thymus and perithymic fat tissue. In this technique, the thymoma was never touched and the normal thymic tissue and peri-thymic fat were used for grasping and for traction. This technique avoids a direct manipulation of the tumor, in order to minimize the risk of tumor seeding in consequence of capsule damage. All thymus and perithymic fat were dissected with safe surgical margins, according to the International Thymic Malignancy Interest Group criteria (17), and the completeness of thymectomy was assessed by macroscopic inspection of the thymic bed, specimen and subsequent pathological analysis (Figure 2).

The robotic approach was left-sided in 51 (38%), right-sided in 80 (59.8%) and bilateral in three (2.2%) patients. The median operative time was 140 minutes, ranging between 60 and 353 minutes (mean 146.4±43 minutes). Twelve (8.9%) patients needed conversion to an open approach (in two cases due to large diameter of tumor interfering with a safe dissection, in 10 cases for unexpected invasion of surrounding structures as the great vessels, lung or pleura-pericardial implants). In one (0.7%) case, a standard thoracoscopy was used after robotic system breakdown. In six (4.4%) cases, an additional access (cervicotomy in one case, an additional homolateral thoracoscopic port for suction purpose in five cases) was required. No vascular and nerve injuries were recorded, and no perioperative mortality occurred. A total of 23 (17.1%) patients had postoperative complications: four cases of atrial fibrillation, three cases of myasthenic crisis, three pneumothoraces after chest tube removal, three pleural effusions, two cases of pneumonia, one haemothorax treated conservatively by blood transfusion, one chylothorax, one orthostatic hypotension, one wound infection, one urinary tract infection treated with medical therapy, one pulmonary embolism, one mediastinal infection, and one pulmonary herniation. Median hospital stay was 4 days (range, 2–35 days; mean 4.8±2.5 days). Mean diameter of the resected tumors was 4.4±1.3 cm (range, 1–10 cm), Masaoka stage was I in 46 (34.4%), II in 71 (52.9%), III in 11 (8.3%), IVa in 5 (3.7%) and IVb in 1 (0.7%) patient. Histologic evaluation revealed 22 (16.4%) type A, 23 (17.2%) type AB, 23 (17.2%) type B1, 40 (29.8%) type B2, and 26 (19.4%) type B3 thymomas. At the last follow up (May 2015: median 42 months, range, 5–159 months; mean 48±35.7 months), 131 (97.8%) patients were alive, 3 (2.2%) patients died all for non-thymoma related causes (leukemia, vulval carcinoma and colon carcinoma). A pleural recurrence was found in 1 (0.7%) patient with original Masaoka stage IVa. The five-year overall survival rates were 97%, and the five-year thymoma-related survival rates were 100%. 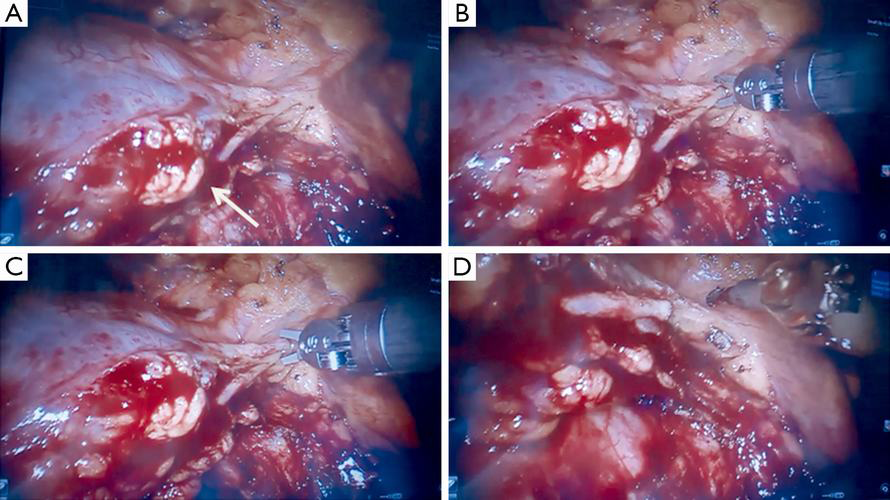 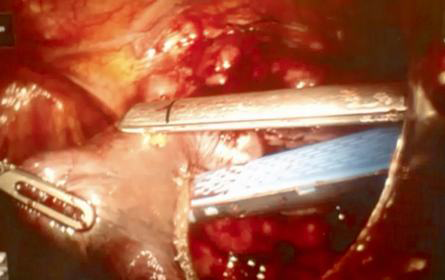 Figure 4 Intraoperative right thoracoscopic view of a thymoma invading the right lung, resected by wedge using an endoscopic stapler during a robotic procedure. 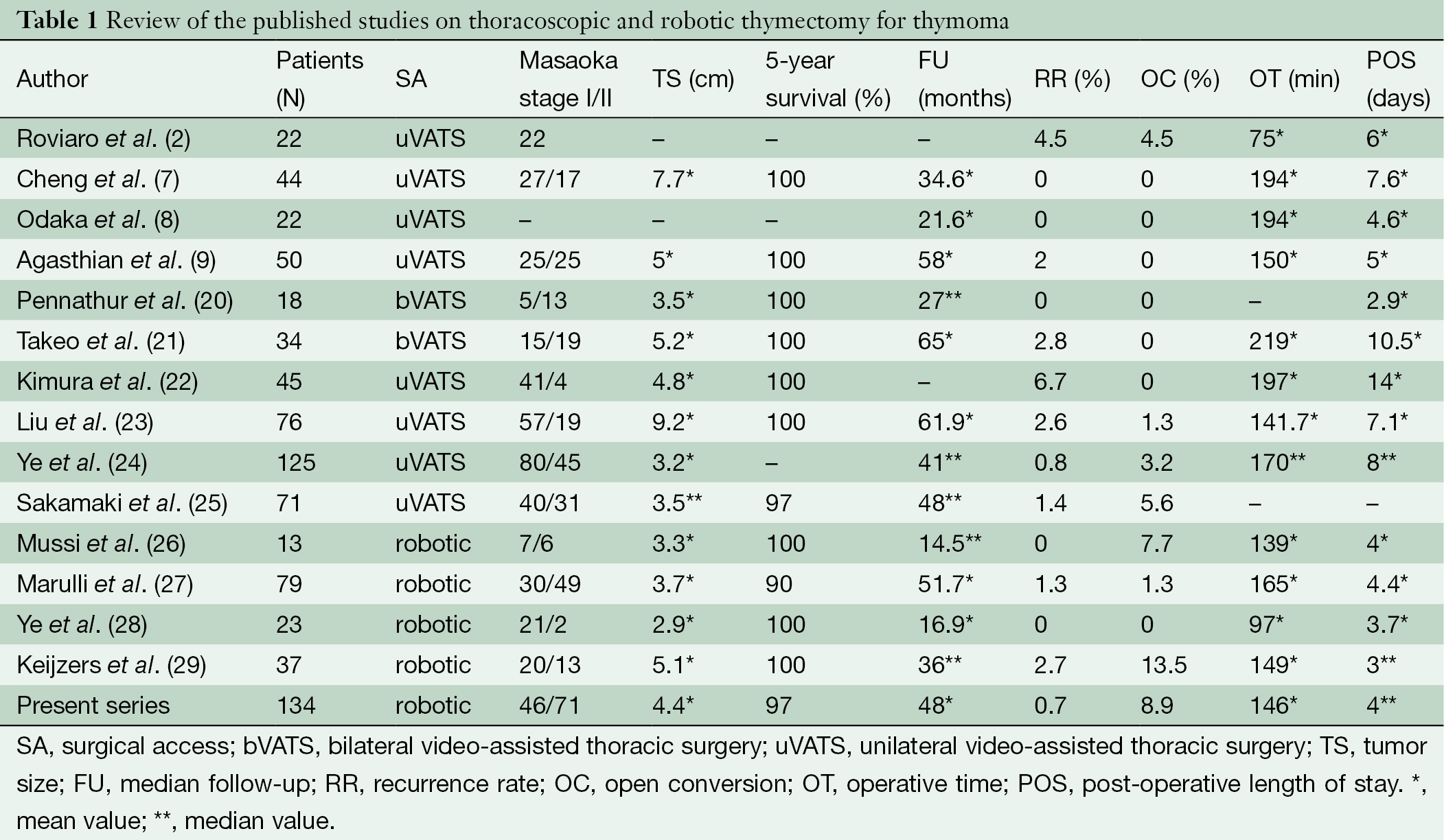 In summary, robotic thymectomy for early stage thymoma is a technically safe and effective operation. In addition to the advantages of a minimally invasive approach (short hospital length of stay, excellent cosmetic results, low morbidity), increased visualization and instrument dexterity enabled by robotic technology provides further benefit compared to conventional thoracoscopy. Our data on a large number of patients are encouraging, particularly for early stage thymoma, despite a relatively short oncologic follow-up period. Extended resections for Masaoka stage III/IV may be possible for selected patients, but they are considered experimental.