Thymectomy is most commonly indicated and performed for myasthenia gravis (MG), thymoma, and other anterior mediastinal tumors (1-6). While median sternotomy has long been the accepted standard approach, minimally invasive methods have emerged over recent decades including transcervical, video-assisted thoracoscopic (VATS), and robotic video-assisted thoracoscopic (R-VATS) approaches (7-11). While maintaining safety and surgical veracity remain the first priority, in appropriately selected patients, minimally invasive approaches aim to lower postoperative morbidity and improve post-operative quality of life. However, there remains debate regarding the indications, selection, and outcomes of patients undergoing these procedures versus open resections (12-31).

The purpose of this systematic review was to synthesize the current literature comparing minimally invasive thymectomy (MIT) versus open thymectomy (OT) approaches. We sought to identify patient demographics and surgical strategies employed, and describe key perioperative and long-term outcomes associated with each approach.

An electronic search of the PubMed database (http://www.ncbi.nlm.nih.gov/pubmed) was conducted from June 2015 to August 2015, employing English language and full-text availability restrictions. The following search terms were employed: “thymectomy AND (robot OR robotic)” OR “thymectomy AND thoracoscopic”. Results for these searches were then combined and duplicates were sequentially removed.

Comparative studies reporting clinical outcomes of patients who underwent MIT and OT were eligible for inclusion. To be included, studies were required to have at least 15 patients in each surgical arm.

The listed authors extracted data for this review, and quality of evidence was assessed through examination of the design, analysis and sample size of each study. Relevant data from selected studies were tabulated, sorted by characteristics and outcomes of interest. We then performed a descriptive analysis by evaluating the overall trends in studies comparing MIT versus OT.

Literature search of the PubMed database using the proposed filters produced a total of 177 articles suitable for screening. Articles were subsequently evaluated for relevancy to this review topic, with 53 meeting eligibility criteria. Of these 53 articles, 20 were found to include a comparison of MIT and OT, and have at least 15 subjects in each surgical arm. These 20 studies were included in this review (Figure 1). 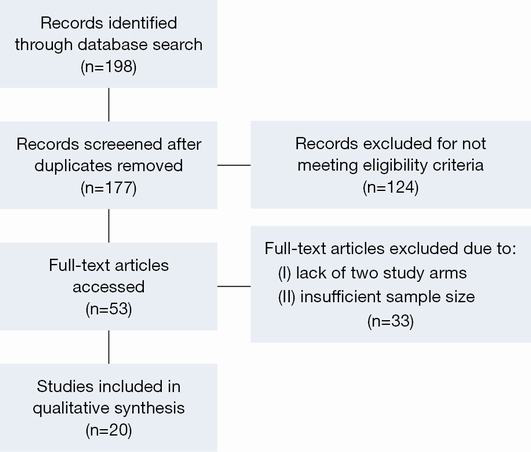 A total of 2,068 patients were reported in the identified studies, including 838 (40.5%) who underwent MIT and 1,230 (59.5%) who underwent OT procedures. Overall, surgical cohorts within individual studies were well matched, with only one study identifying a statistically younger median age in the MIT group versus the OT group (46 vs. 52 years; P=0.02) (20). There was considerable variation of age and gender across studies. Patient age ranged from a mean 20.5 to a median of 64 years in the MIT groups, and a mean of 25.5 to a mean of 65.4 years in the OT groups. Gender distribution ranged from 18% to 64% male in MIT groups, and 29% to 61% male in OT groups (Table 1). 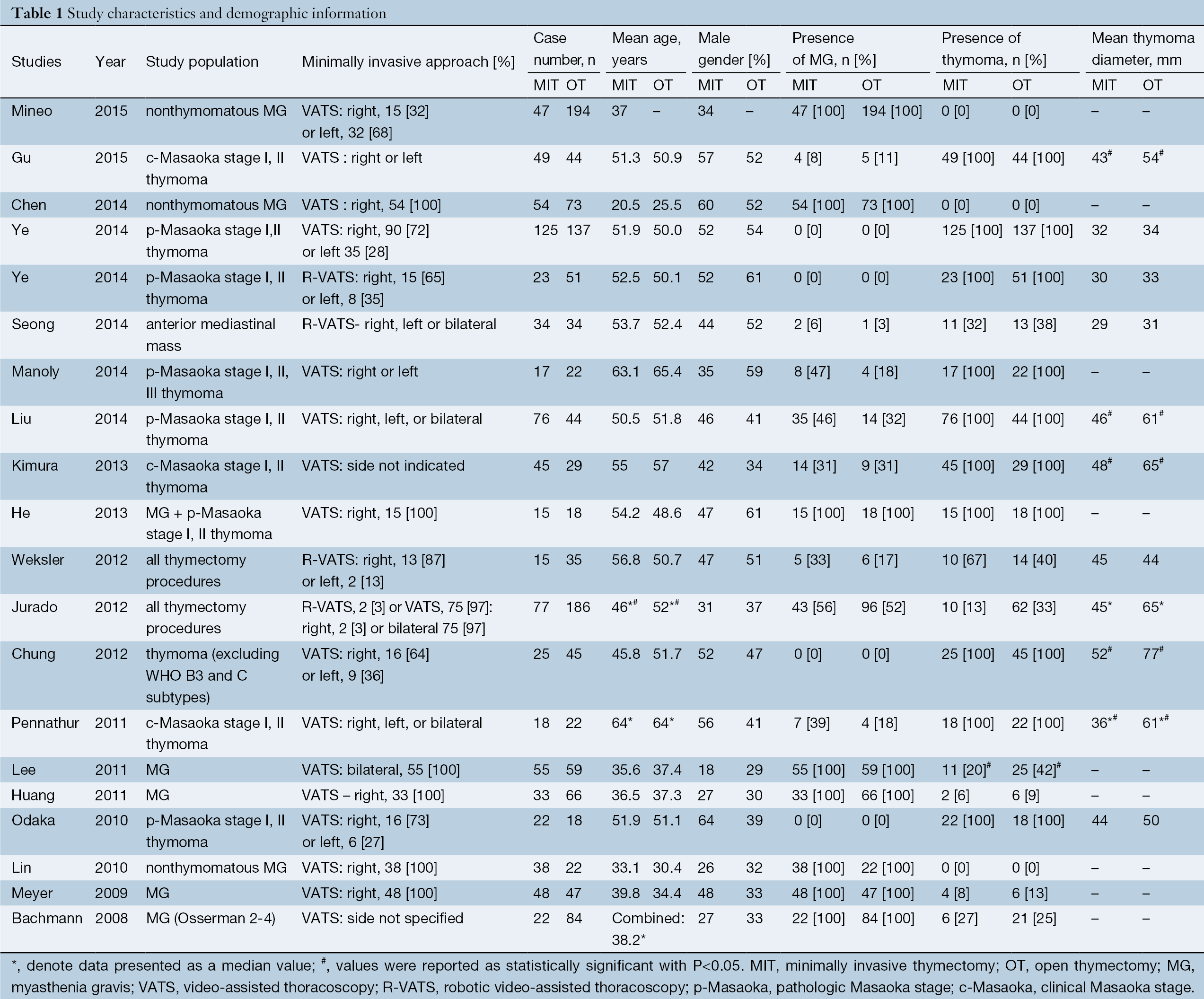 The most common indications for thymectomy in the included studies were thymoma [1,046, (51%)] and/or MG [1,132, (55%)]. Overall, 469 (56%) of MIT patients and 577 (47%) of OT patients had thymoma. Similarly, 430 (51%) of MIT and 702 (57%) of OT patients had MG. Patients with thymoma were selected by either clinical or pathological Masaoka staging, and in one instance, World Health Organization (WHO) pathological staging (19). Patients with MG were selected by either thymoma status or Osserman classification. Two studies included all thymectomy procedures for any indication (20,21). Seong et al. included thymectomy performed for all anterior mediastinal masses (Table 1).

There was no consistent trend in operative times among studies (Table 2). Three studies reported statistically shorter operative times in the MIT groups (28-30), while another three-demonstrated statistically shorter times in the OT groups (16,22,31). Estimated blood loss in the MIT groups ranged from a median of 20 mL to a median of 200 mL. OT blood loss ranged from a mean of 86 mL to a mean of 466 mL. Twelve of 14 studies reported significantly less blood loss during MIT versus OT (15-17,20-24,28-31). 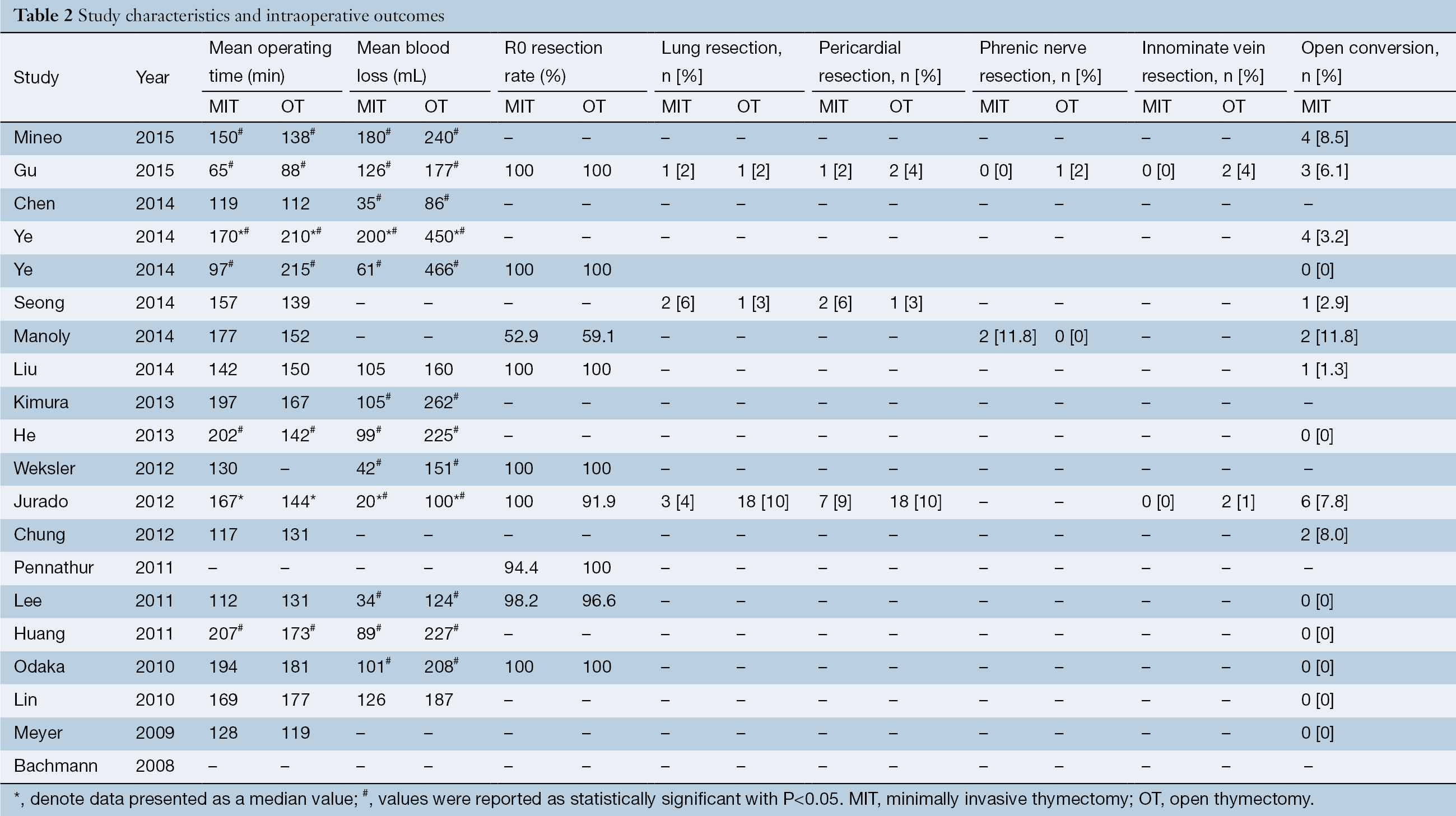 There was no significant difference in resection margins between MIT and OT. Reported rates of R0 resection of thymoma ranged from 59.1% to 100% during MIT versus 52.9% to 100% during OT. Chung et al. reported a higher incidence of local thymoma invasion in their OT arm [4 (8.9%) vs. 0 (0%); P=0.044]. Four studies provided rates of en bloc resection of adjacent structures necessary to complete the operation (20,26,27,30). Manoly et al. reported phrenic nerve resection in two (11.8%) of MIT patients in order to obtain complete thymoma resection (0% in OT). Diaphragmatic plication was not performed in either case. Other structures included lung parenchyma removed via wedge resection (MIT, 2–6%; OT, 2–10%), pericardium (MIT, 2–9%; OT, 3–10%), and innominate vein (MIT, 0%; OT, 1–4%). Some structures were resected en bloc and in combination with others. No studies reported a significant difference in rates of additional resection (Table 2). It was not possible to determine from these studies the rates of R0 resection following en bloc additional resections.

There were 23 reported open conversions to either sternotomy or thoracotomy in this series. Rates of conversion ranged from 0% to 11.8% (Table 2). Eight were performed for bleeding, three for pleural adhesions, and four for invasion of vascular structures and/or phrenic nerve. Other reasons included local tumor invasion of pericardium, lack of experience with MIT, or no indication was provided. 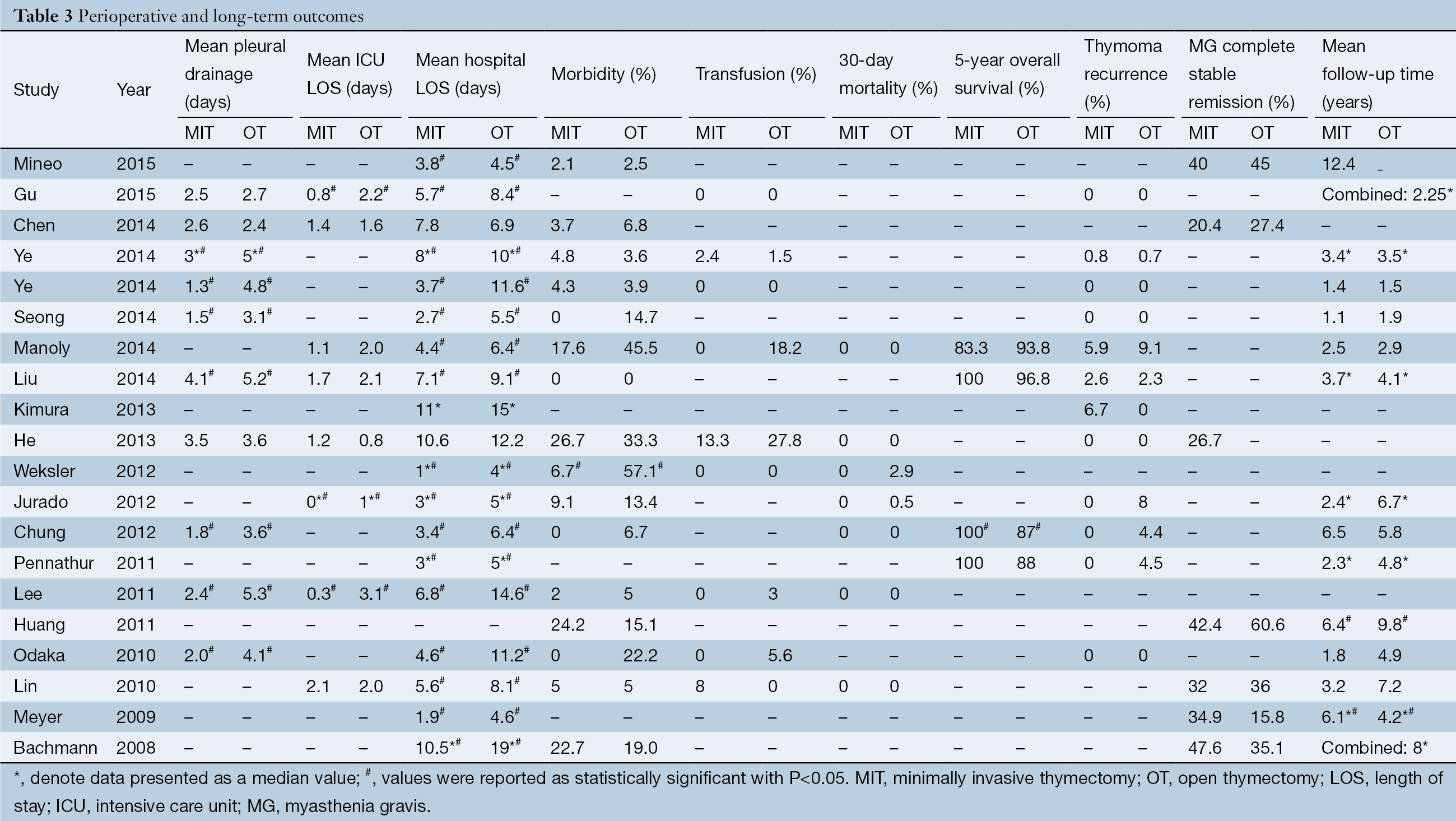 Ye and colleagues reported mean hospitalization costs of 53,886 versus 43,798 Chinese Yuan for R-VATS and transsternal thymectomy, respectively. These findings were not found to be statistically significant (P=0.174) (data not shown).

Thymectomy is an important component in the treatment of early stage thymoma and anterior mediastinal tumors, as well as MG. Selection of surgical technique has been a long debated topic since its initial development. The current debate is focused on the determination of which surgical approach minimizes perioperative morbidity, while also offering acceptable long-term outcomes associated with a complete resection. The aim of this study was to investigate and summarize the current literature comparing minimally invasive and open approaches for thymectomy. We were particularly interested in perioperative and long-term outcomes, as well as any key differences in patient demographics between the surgical groups.

Surgical cohorts within each study were well matched with regards to age and gender, with one exception (20). However, we found considerable variation across studies, which can likely be attributed to differences in patient selection. This variation was likely due to differences between the two most common indications for thymectomy: (I) MG, which classically affects younger populations; and (II) thymoma, which presents at later ages. In studies investigating nonthymomatous MG, mean age ranged from 20.5 to 33.1 years in MIT groups and 25.5 to 30.4 in OT arms. In comparison, studies listing thymoma as an inclusion criterion had a mean age ranging from 45.8 to 64.0 years for MIT and 50.0 to 65.4 years for OT arms. This heterogeneity in populations may have contributed to the variation in reported outcomes across studies.

OT was consistently utilized for larger thymomas, while MIT was implemented for smaller tumors. Several studies reported a thymoma diameter cutoff for MIT at 5 cm (19,23,25,28,29), 6 cm (23) or 8 cm (20), which in turn selected for smaller tumors to be resected by MIT. It is difficult to determine the effect that this uneven matching may have had on perioperative and long-term outcomes. It is likely that larger tumors are associated with higher rates of additional en bloc resection of adjacent structures, and carry a different prognosis than smaller tumors. However, due to the paucity of available data, the present systematic review was not able to adequately investigate these differences.

MIT was associated with decreased blood loss, shorter chest tube duration, and shorter hospital LOS (12-31). The incidence of post-operative complications and long-term outcomes were comparable between the two surgical groups. Moreover, there were no reported significant differences in phrenic nerve injury. In patients with resectable disease, MIT may be a superior option for minimization of bleeding and hospitalization time, while offering long-term disease control comparable to OT. However, there is evidence to suggest a role for OT when MIT cannot be safely completed (19,20,26,27,29-31). Such instances include resection of large invasive tumors, dense adhesive disease, and high risk of significant bleeding unable to be controlled by MIT.

In our own experience of 17 patients undergoing R-VATS thymectomy, we have seen acceptable perioperative and short-term outcomes. Mean estimated blood loss in our cohort was 39 mL, and median chest tube and hospital LOS were 1 and 2 days, respectively. Robotic assisted MIT may show promise in development of safe and effective strategies for obtaining complete thymic resections, and potentially offer advantages of better visualization and instrument control over non-robotic MIT approaches.

The present study had several limitations. As with any systematic review, the process of literature search is prone to publication bias and the non-differential selection of studies with positive findings. To date, there have been no randomized trials comparing MIT and OT. As a result, this review was composed of non-randomized observational reports with significant and inherent selection bias. Another limitation was the degree of variability across studies with regards to study design, patient selection criteria, clinical versus pathologic staging, follow-up time, and presentation of findings. Additional limitations include effects of surgeon experience and learning curves associated with the various procedures, which were largely unreported or difficult to quantify in the included studies.

In appropriately selected patients with MG, or with moderate to small sized thymoma, therapeutic outcomes of MIT are comparable to OT, and may result in shorter hospital length of stay, decreased blood loss, and potentially fewer post-operative complications. Right or left VATS approaches appear to be comparable in outcome and a matter of surgeon preference. While robotic assisted approaches may afford the surgeon improved control and visualization during the conduct of operation, clinical outcomes appear to be similar to VATS. Cost analyses remain indeterminate, with MIT likely incurring higher operational costs than OT, but with potentially overall lower cost due to decreased length of hospital stay. The impact of robotic assisted approaches on cost remain a significant unknown, with “common” wisdom suggesting higher costs due to the high capital costs of these platforms, but with few formal analyses investigating this assumption. Prospective, randomized, controlled trials will likely be necessary to better delineate the differential outcomes and costs between open and minimally invasive approaches in these patients.

We would like to thank Kathy Lovas for her assistance with editorial support.