Ischemic mitral regurgitation (IMR) is a frequent complication of myocardial infarction, occurring in 13% to 50% of cases (1,2). The presence of IMR portends a poor prognosis and is associated with reduced long-term survival and impaired functional status (2,3). The pathophysiology of IMR mainly relates to the chronic adverse left ventricular (LV) remodeling that occurs following myocardial injury resulting in tethered mitral leaflets with poor coaptation.

Current practice guidelines recommend mitral valve repair (MVr) or mitral valve replacement (MVR) for severe IMR, but do not specify which procedure represents the optimal surgical approach (4,5). Potential benefits of MVr over MVR have been well described for other etiologies of mitral valve disease, particularly degenerative MR (6). However, IMR poses a unique surgical challenge as mitral regurgitation (MR) can occur in the presence of a structurally normal valve. Given the lack of multiple prospective randomized trials, a rigorous assessment of MVr and MVR requires a systematic and critical analysis of the current literature. The present meta-analysis aimed to assess the clinical outcomes of patients who underwent MVr or MVR for IMR.

Electronic searches were performed using Ovid Medline, Embase, Cochrane Database of Systematic Reviews, Cochrane Central Register of Controlled Trials, Cochrane Methodology Register, Database of Abstracts of Reviews of Effects and ACP Journal Club from their dates of inception to July 2015. The search terms “mitral” and (“ischemic” or “ischaemic”) and (“repair” or “replacement” or “annuloplasty”) and (“mortality” or “death” or “survival”) were entered as keywords and MeSH terms. This was supplemented by hand searching the reference lists of key reviews and all potentially relevant studies.

Two reviewers (A.S. and D.D.) independently screened the title and abstract of records identified in the search. Full-text publications were subsequently reviewed separately if either reviewer considered the manuscript as being potentially eligible. Disagreements regarding final study inclusion were resolved by discussion and consensus.

Eligible studies were those reporting peri-operative or late mortality following MVr and MVR in patients with IMR. Studies were excluded if: (I) cohorts had mixed mitral valve etiologies and mortality data for the ischemic subset could not be separately determined; (II) concomitant surgical ventricular restoration was performed in either group; (III) there were fewer than ten patients in either the MVr or MVR group.

All publications were limited to those involving human subjects and written in English. Abstracts, conference presentations, editorials and expert opinions were excluded. Review articles were omitted because of potential publication bias and duplication of results. When institutions published duplicated studies with accumulating numbers of patients or increased lengths of follow-up, only the most complete reports were included for quantitative assessment.

All data were independently extracted from text, tables and figures by two investigators (A.S. and D.D.). The final results were reviewed by the senior reviewer (C.C.). The pre-determined primary endpoints were peri-operative and late mortality. Peri-operative mortality was defined as death within 30 days after surgery or during the same hospitalization. Late mortality was defined as death occurring during study follow-up period (minimum 12 months). Secondary outcomes included recurrence of at least moderate MR (grade ≥2), mitral valve re-operation, and echocardiographic measurements of LV remodeling.

Baseline characteristics and operative details were presented as raw values (%), mean ± standard deviation or median [interquartile range (IQR)] unless otherwise indicated. Pooled values for clinical outcomes were calculated using the DerSimonian-Laird random-effects model (7). The relative risk (RR) was used as the summary statistic, and reported with 95% confidence intervals (CI). Meta-analyses were performed using random-effects models to take into account the anticipated clinical and methodological diversity between studies. The I2 statistic was used to estimate the percentage of total variation across studies due to heterogeneity rather than chance, with values exceeding 50% indicative of considerable heterogeneity.

A total of 1,125 unique records were identified through the database searches. Of these, 1,076 were excluded on the basis of title and abstract content. After screening the full text of the remaining 49 articles, 23 studies met the criteria for inclusion (11-33). The study selection process is summarized in Figure 1. 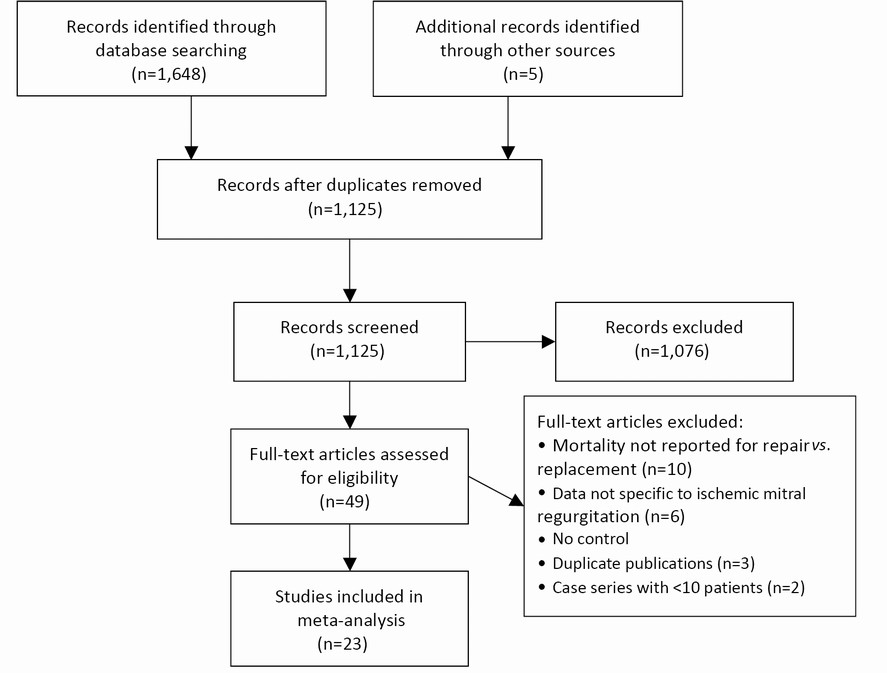 Of the included studies, there were 21 retrospective observational studies, one prospective observational study (OS) and one randomized controlled trial (Table 1). These included data on a total of 4,066 patients, including 2,357 patients who underwent MVr and 1,709 who underwent MVR. The median study sample size was 130 (range, 49-522). The mean or median follow-up duration was reported in 18 studies, ranging from 12 to 92.4 months. Baseline patient characteristics and risk factor profiles are summarized in Table 2, and a summary of operative details is presented in Table 3. 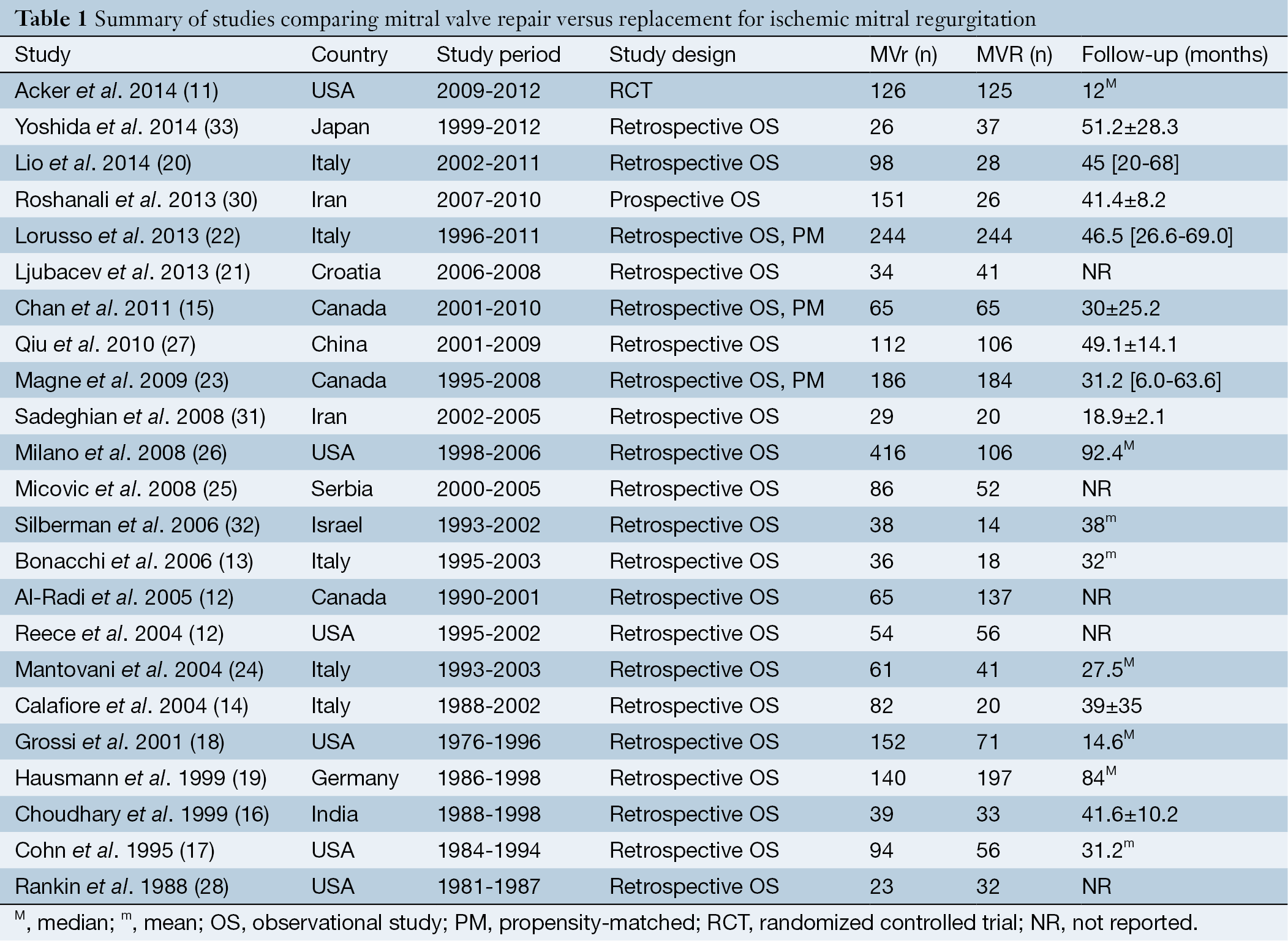 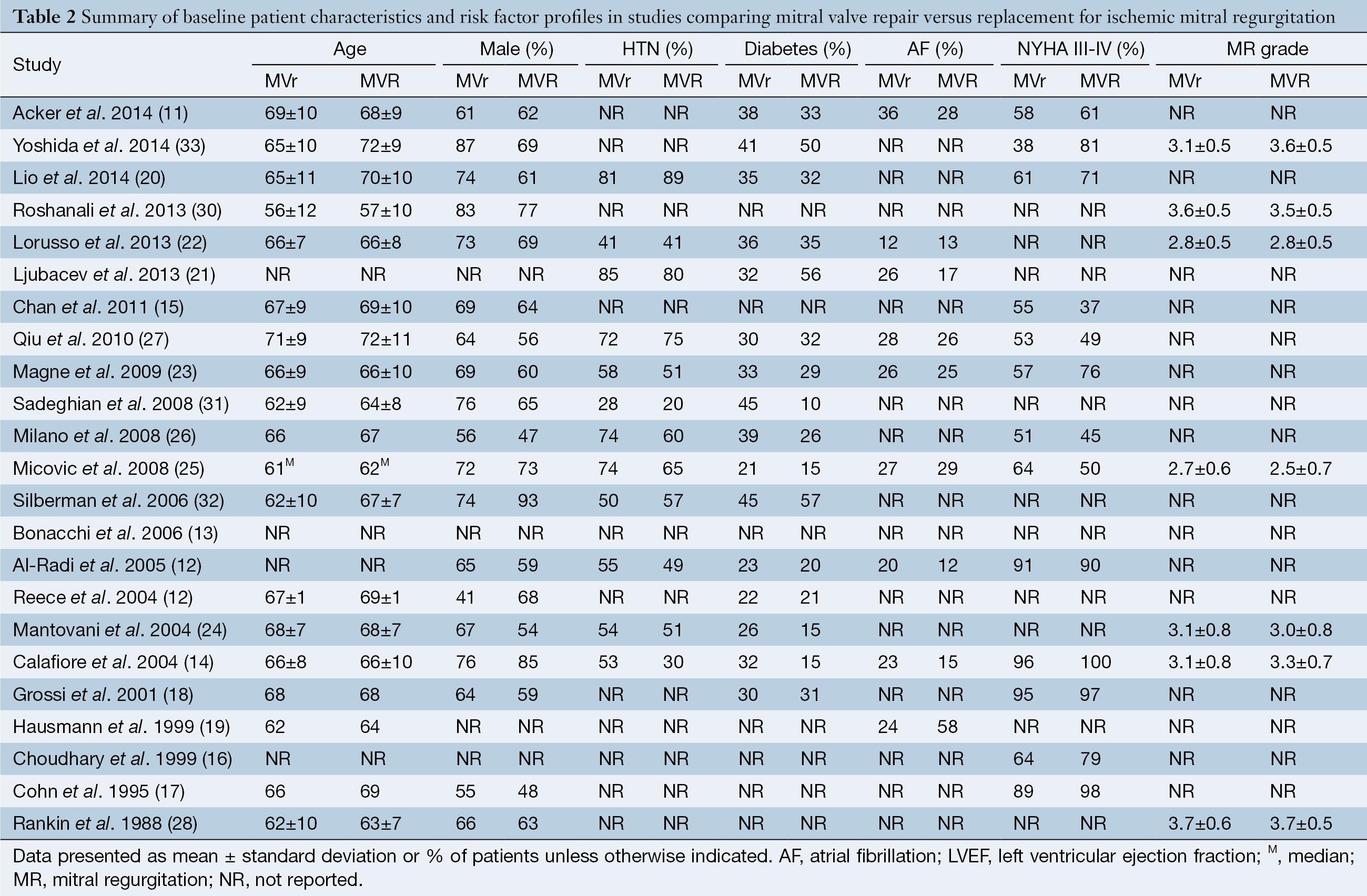 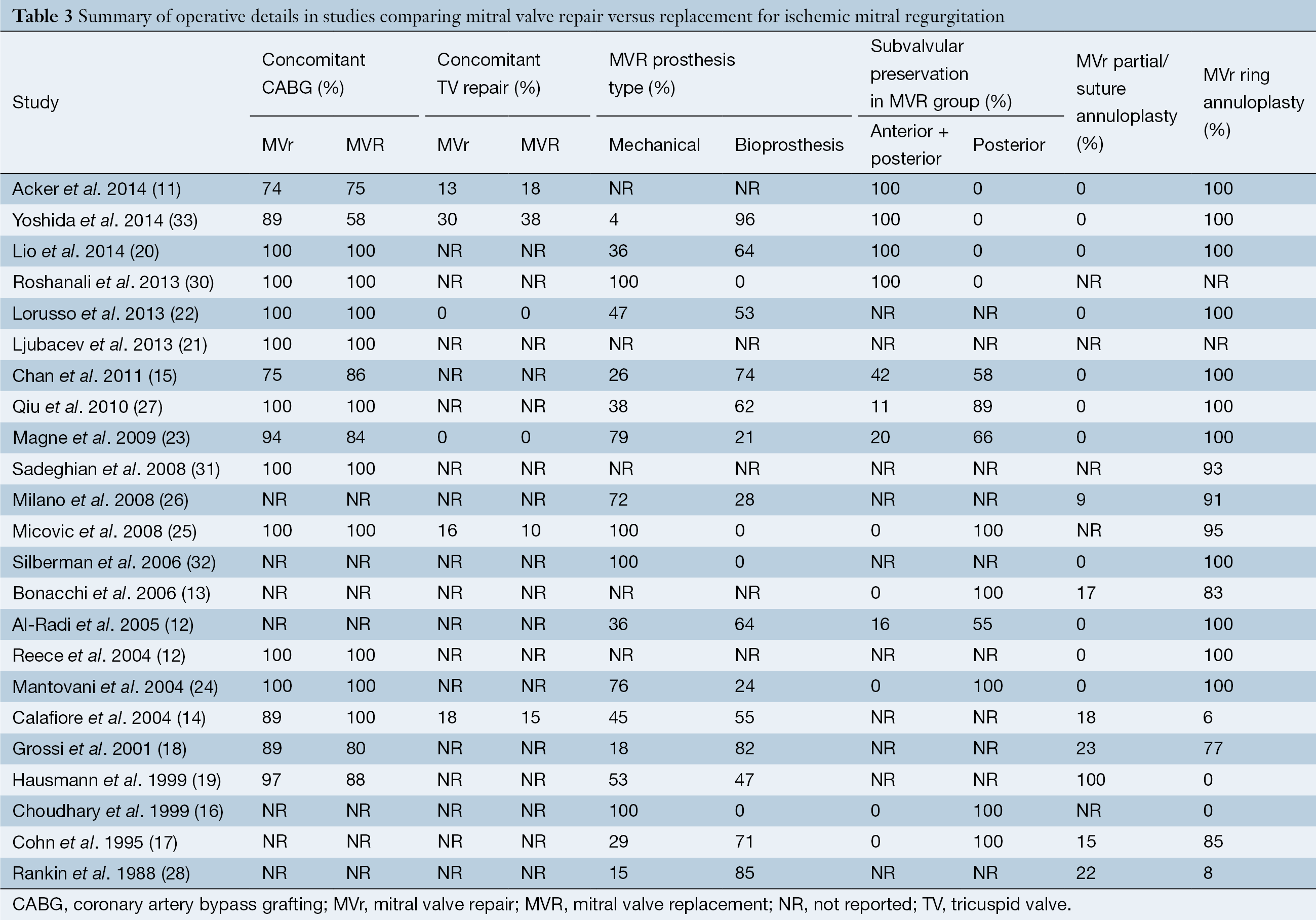 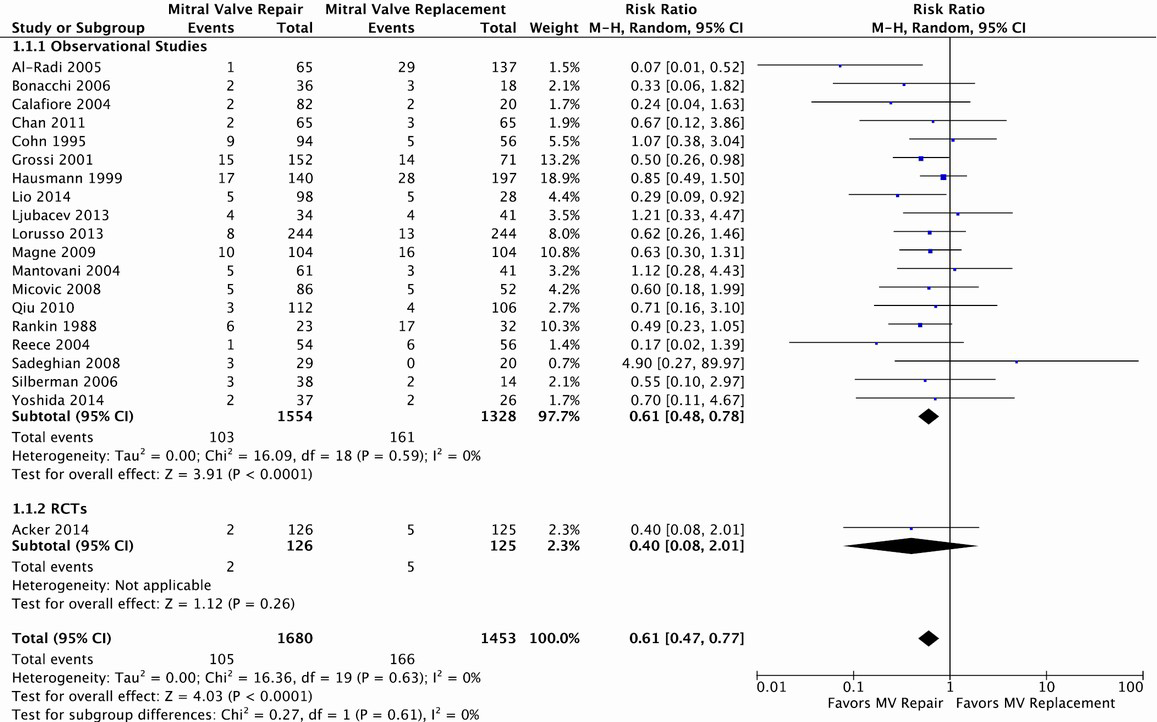 Figure 2 Forest plot displaying the relative risk (RR) of all-cause peri-operative mortality for mitral valve repair (MVr) versus replacement (MVR). The RR of individual studies correspond to the middle of the squares, the horizontal lines show the 95% confidence intervals (CI), and the pooled RR is represented by the middle of the solid diamond. A test of heterogeneity between studies is given below the summary statistics.

Figure 3 Forest plot displaying the relative risk (RR) of all-cause late mortality for mitral valve repair (MVr) versus replacement (MVR). The RR of individual studies correspond to the middle of the squares, the horizontal lines show the 95% confidence intervals (CI), and the pooled RR is represented by the middle of the solid diamond. A test of heterogeneity between studies is given below the summary statistics.

Figure 4 Forest plot displaying the relative risk (RR) of mitral valve re-operation for mitral valve repair (MVr) versus replacement (MVR). The RR of individual studies correspond to the middle of the squares, the horizontal lines show the 95% confidence intervals (CI), and the pooled RR is represented by the middle of the solid diamond. A test of heterogeneity between studies is given below the summary statistics.

Figure 5 Forest plot displaying the relative risk (RR) of recurrence of mitral regurgitation (MR) (grade ≥2) for mitral valve repair (MVr) versus replacement (MVR). The RR of individual studies correspond to the middle of the squares, the horizontal lines show the 95% confidence intervals (CI), and the pooled RR is represented by the middle of the solid diamond. A test of heterogeneity between studies is given below the summary statistics.

A complete summary of pre- and post-operative echocardiographic measurements is displayed in Table S1. Due to the lack of raw data available, it was not possible to conduct meta-analyses for these endpoints. 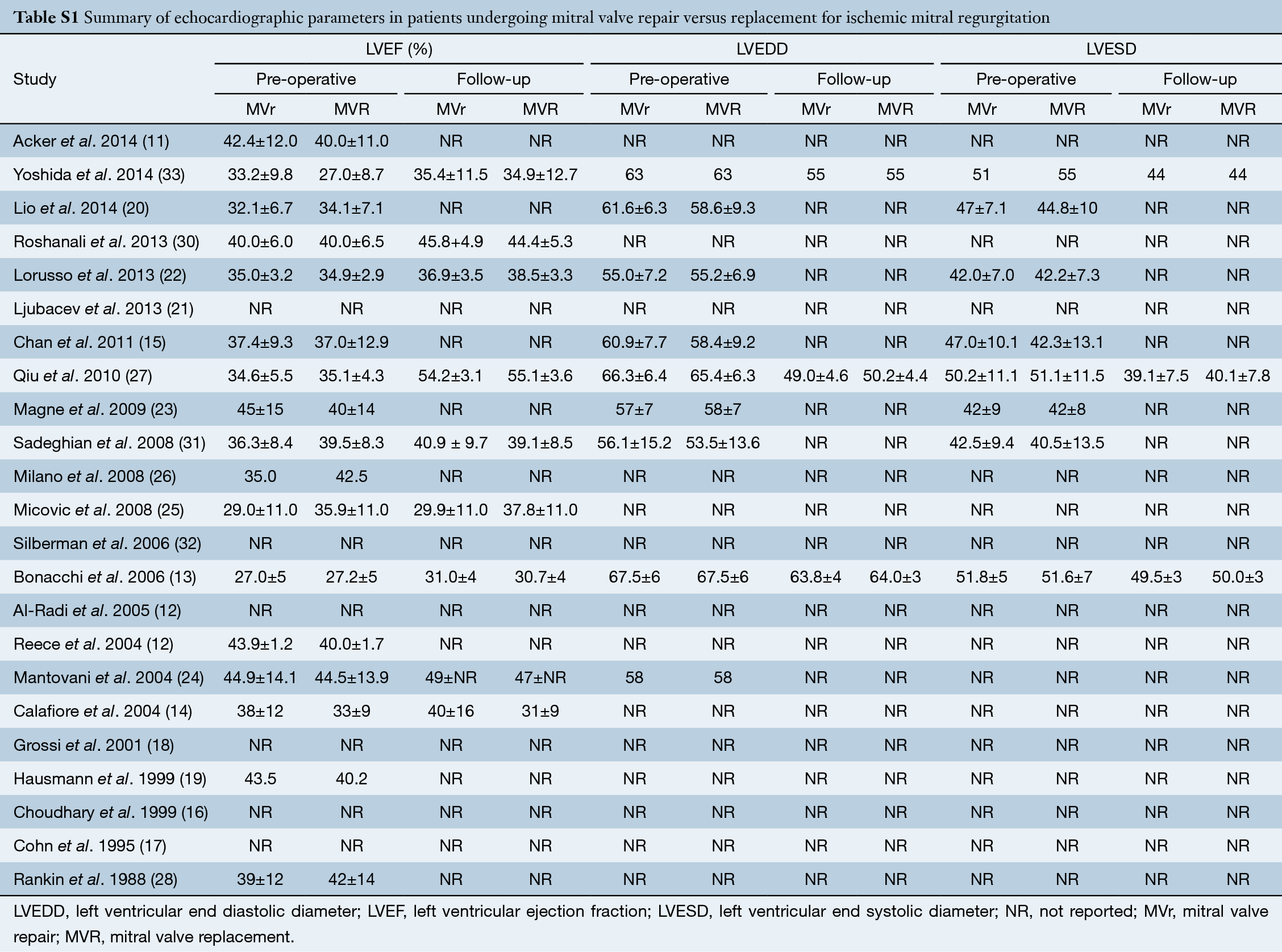 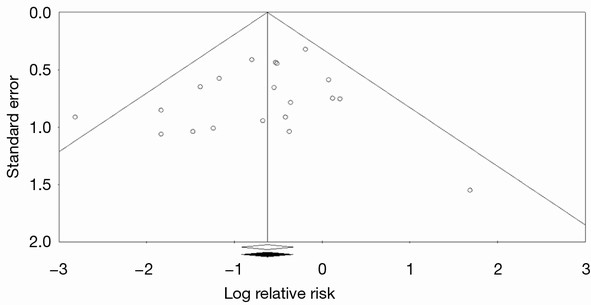 In recent years, MVr has been increasingly performed in the surgical management of IMR (34). The Society of Thoracic Surgeons database from 2008-2012 reported that valve repair occurred in almost two-thirds of mitral valve surgeries in patients who underwent concurrent coronary artery bypass graft surgery (11). However, this trend of increased MVr has not been based on any conclusive evidence demonstrating superior outcomes for this approach.

To date, there has only been one RCT that has assessed clinical outcomes following MVr or MVR in patients with IMR. This RCT demonstrated similar 30-day and 12-month mortality between the two approaches (11). In contrast, our meta-analysis demonstrated significantly reduced peri-operative and late mortality in patients who underwent MVr. There are several possible reasons for this discrepancy. In clinical practice, high-risk patients with multiple co-morbidities and poor baseline function are often preferentially allocated to MVR over MVr. This was demonstrated by the patient characteristics of several included observational studies, in which patients within the MVR cohorts had significantly higher prevalence of baseline co-morbidities (Table 2) (19,33). Although several observational studies presented data for propensity-matched cohorts, these statistical methods are not a substitute for randomization, and key clinical confounders may have been omitted (35). It should also be noted that the only RCT to date had a relatively small sample size and follow-up was limited to 12 months. In the present meta-analysis, subgroup analysis demonstrated the reduction in late mortality following MVr to be most evident beyond 36 months, suggesting trials with shorter follow-up duration may be unable to detect potential mortality differences.

Both the randomized and observational data demonstrated a significantly higher rate of at least moderate MR following MVr (Figure 3). This represented an important finding as recurrence of MR >2 has been shown to be an independent predictor of poor long-term outcomes (36). Interestingly, the higher rate of recurrent MR did not translate to an increased incidence of mitral valve re-operation.

Several studies included in the present meta-analysis reported outdated surgical techniques, such as low rates of annuloplasty ring implantation with mitral repair (14,16,19,28). To account for this and ensure our results were relevant to contemporary surgical practice, we conducted sensitivity analyses excluding studies in which patients were mostly operated prior to 2000. These analyses did not significantly change the overall results obtained for peri-operative mortality, late mortality or recurrence of MR. However, in sensitivity analysis, there was a trend towards significantly higher rates of mitral valve re-operation following MVr. Of note, earlier studies tended to report lower preservation of both anterior and posterior leaflets during MVR (16,17). Bi-leaflet preservation has been shown to provide the greatest reduction in LV chamber size and systolic afterload, as well as maximal improvement in ventricular performance, and this may have contributed to a temporal effect on re-operation rates (37,38).

The findings of the present meta-analysis were limited by several key constraints. Firstly, the vast majority of included studies were single-center retrospective observational reports and thus had biases inherent to such study designs. Secondly, pre-operative and follow-up echocardiographic measurements were not reported in sufficient detail to enable meta-analysis, and could only be qualitatively summarized. This was a significant limitation as improvements in measurements such as LV volume index are significantly associated with improved clinical outcomes (39,40). Thirdly, quality of life endpoints and measures of functional status were also scarcely reported and thus could not be statistically analyzed in the present meta-analysis. Finally, follow-up periods and protocols differed widely between institutions and some studies may have reported lower rates of MR recurrence or mitral valve re-operation due to incomplete follow-up. However, in studies with specified follow-up periods, the minimum duration was 12 months.

In conclusion, the present meta-analysis demonstrated significantly reduced peri-operative and late mortality following repair versus replacement for patients with ischemic mitral valve regurgitation. However, these findings should be considered within the context of the clinical variables driving patient selection for each approach. Recurrence of at least moderate MR was significantly higher following MVr but rates of mitral valve re-operation were not significantly different. Larger studies with longer follow-up duration are required to further assess overall survival and freedom from re-intervention, as well as the impact of both surgical approaches on quality of life and functional status.