With an ever-increasing disease burden, coronary artery disease is the foremost cause of heart failure and myocardial infarction (1). Acute myocardial infarction (AMI) leads to a number of acute and chronic complications that are mediated by various factors. Post-AMI sequelae are characterized by myocardial remodeling—an umbrella term for repair of necrotic heart muscle through thinning, formation of collagen scars, compensatory hypertrophy of non-infarcted myocardium, and eventual ventricular dilation with change in its geometry (2,3). The mechanism underlying remodeling is change at a molecular and cellular level which occurs in response to myocardial necrosis post-AMI. Maladaptive remodeling further negatively affects ventricular function and eventually leads to congestive heart failure, the incidence of which is increasing in survivors of acute MI. Current therapies are targeted at preventing and reversing such adverse remodeling (1-3).

Surgical ventricular reconstruction (SVR) is an attempt at controlling adverse ventricular remodeling by excluding dyskinetic and scarred ventricle, prevention of further ventricular dilation, and restoration of the geometry of the ventricle (2). This procedure, with its subsequent modifications, was pioneered by Cooley (4), Dor (5) and Jatene (6). However, the Dor procedure/modification is the most widely used technique of SVR, which is otherwise called endoventricular patch plasty (EVCPP) (7). The aim is to reduce LV volume and restore the elliptical shape of the ventricle thereby improving EF as well as cardiac function. This surgery is usually undertaken concurrently with coronary artery bypass graft (CABG) surgery.

In 2009, results of the Surgical Treatment for Ischemic Heart Failure (STICH) trial (8) reported greater reduction in ventricular volume with addition of SVR to CABG but no difference in rates of death or hospitalization due to cardiac causes. These results put into question the utility of SVR when combined with CABG and led to a decrease in its popularity (2,9). Being the most consequential trial on SVR efficacy in the last few decades, the STICH trial started conversations regarding the proper place of SVR in treatment of post-MI remodeling and heart failure.

Given the discordant views and results regarding the efficacy of SVR, we sought to gather and analyze in granular detail, all available evidence on the utilization of SVR in patients suffering from ischemic cardiomyopathy. Through this systematic review and meta-analysis, we hope to evaluate the efficacy and utility of SVR.

Eligible articles for this systematic review were full-length studies published from January 2000 to May 2020 in the English literature that included adults undergoing left ventricular reconstruction for ischemic cardiomyopathy. All technical approaches for SVR were included. Studies that included patients not undergoing left ventricular reconstruction or included patients with non-ischemic cardiomyopathy were excluded. Case reports, abstracts, conference presentations, editorials, reviews and expert opinions were also excluded. When institutions published more than one study including overlapping patient populations, only the most complete reports were included. The Newcastle-Ottawa Scale (NOS) scoring system was utilized to assess risk of bias for the identified studies as recommended by the Cochrane Collaboration.

Study level data were extracted from the text, figures and tables of all eligible articles (BF, KM, GG). Discrepancies between the reviewers were resolved by discussion and consensus.

Baseline patient characteristics and clinical outcomes were reported as the pooled mean with 95% confidence intervals (CI). For dichotomous variables, a meta-analysis of proportions with logit transformation was conducted for preoperative and postoperative variables. Continuous data were combined via meta-analysis with random-effects model. Heterogeneity was evaluated using Cochran Q and I2 test. Survival data from each study were collected and pooled to retrieve a weighted mean and 95% confidence interval at specific time points. Such data were then graphically displayed to visualize survival over time. R software 3.5.0, meta package (R Foundation for Statistical Computing, Vienna, Austria) was used for data analysis. P values <0.05 were considered statistically significant.

A total of 2,236 articles were identified by conducting the search of four databases. Eligible studies included all prospective and retrospective studies on patients who underwent SVR for ischemic cardiomyopathy. After removal of duplicate articles, 1,171 articles remained. A total of 891 articles were excluded after a detailed evaluation of the title and abstract of each article. The remaining 280 articles underwent a full text evaluation, of which ninety-two articles met inclusion criteria with a collective 7,685 patients. The mean NOS score for included studies was six. Sixty studies had a score of either six or seven, indicating that a majority of the included studies were of fair to good quality. A PRISMA flow diagram illustrating the search strategy is provided in Figure 1. A detailed list of the studies included is located in the supplementary material as Table S1. In addition, NOS scoring details for all included studies are presented in the supplementary material as Table S2. 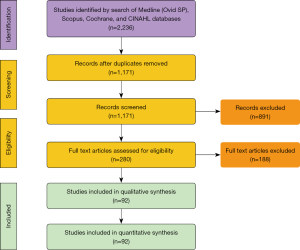 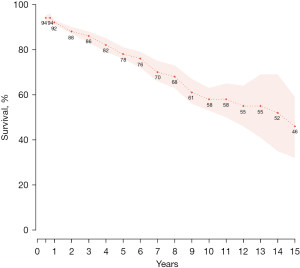 Utilization of SVR has been greatly impacted by the STICH trial. Critics have pointed out flaws in its methodology and interpretation of results (2,10,11), while others have argued against broad application of SVR in ischemic cardiomyopathy (12). This has led to the notion that SVR should be used cautiously in carefully selected patients, which is best reflected in the European Association for Cardio–Thoracic Surgery (EACTS) and European Society of Cardiology (ESC) guidelines on myocardial revascularization in chronic heart failure. Considering SVR with CABG in patients with coronary artery disease, a scarred ventricle and LVESVI >60 mL/m2 is a class IIb recommendation in these guidelines (13).

Of note, the STICH trial was not included in our systematic review/meta-analysis to avoid overlap and double entry of data from its participating institutions. It is worth mentioning that the STICH trial included 501 patients who underwent CABG + SVR (8), while our analysis is based on pooled data from 7,685 patients who all underwent SVR with 92% undergoing concomitant CABG.

The main criticism of STICH is related to patient selection/inclusion and procedural issues. An average reduction of 19% in LVESVI was reported in the CABG + SVR group (8), which is lower than the benchmark of at least a 30% reduction usually achieved by SVR (11). This could have affected the results because postoperative LVESVI is associated with survival. Patients with a postoperative LVESVI greater than 60 mL/m2 have poorer survival than those with an LVESVI <60 mL/m2 (14). Our analysis shows a reduction in LVESVI from 83.9 mL/m2 preoperatively to 46.8 mL/m2 postoperatively—a decrease of 44% and below the 60 mL/m2 threshold for survival benefit. Our results are comparable to the 30% to 50% pre- to post-operative reduction reported in the literature (10,11). This decrease in LVESVI, together with a reduction in the radius of the ventricle, decreases myocardial wall stress according to Laplace’s law. This is a potent means of inducing reverse remodeling (14,15).

Our results show an increase of mean LVEF from 30.0% preoperatively to 40.9% postoperatively. This is comparable to a series reported by Dor et al. where LVEF increased from 26% to 44% one year after SVR (10). In contrast, LVEF of STICH patients undergoing CABG plus SVR increased from 21% to 27% only (8). Variation in technique could account for this difference because more than half of these patients had an LVESVI >60 mL/m2 after surgery (8). After SVR, a mean increase of 10 to 15 points in LVEF has been previously reported (16). This improvement in LVEF is due to the decrease in wall tension and improved contractility resulting from scar removal and restoration of the elliptical shape of the left ventricle (17).

One potential drawback previously reported by Dor is the late worsening of pulmonary hypertension after SVR, which was thought to be due to reduced compliance of the left ventricle by surgical reshaping (7,16). In our analysis, the incidence of pulmonary hypertension trended down from 23% (14–37%) preoperatively to 15% (5–40%) postoperatively (P=0.34). Though this data was limited by the small number of articles with such information reported, the improvement is likely due to an improvement in systolic and diastolic function which subsequently reduces pulmonary pressure. As a result, a reduction in congestive heart failure symptoms is expected, which our results support with an improvement in NYHA functional classification score after SVR. Similar results are also reported by Patel et al. (18).

In our analysis, 21% had concomitant mitral valve repair and 1% had mitral valve replacement. The degree of MR significantly decreased pre to post-operatively (1.6 vs. 0.9) (P<0.01). The Reconstructive Endoventricular Surgery, returning Torsion Original Radius Elliptical Shape to the LV (RESTORE) group has reported similar outcomes, with 23% of their population undergoing mitral valve intervention (22% repair, 1% replacement) (19).

A large number of retrospective studies are included in the analysis. Due to their risk of bias, much of the data is considered moderate quality in our GRADE assessment. However, this represents the largest dataset of SVR patients to have been analyzed. We were unable to complete a quantitative comparison for CABG vs. CABG + SVR since most studies did not have comparative arms for statistical analysis; therefore, we were unable to report survival benefit. Additional future analysis exploring mitral valve intervention in SVR would be beneficial. We also acknowledge the differences in patient selection and surgical technique of SVR, however it was a fundamental limitation that cannot be addressed when working with pooled data.

Surgical ventricular reconstruction reduces left ventricular volume and improves systolic function in patients with ischemic cardiomyopathy. Our results suggest long term survival comparable to existing reports and good symptomatic improvement following intervention. Further research is still needed to explore the optimal indications of SVR and to identify the group of patients who benefit the most from it.