Surgical mitral valve repair remains the gold standard for the treatment of degenerative mitral valve disease according to the most recent American Heart Association (AHA) and European Society of Cardiology (ESC)/European Association for Cardio-Thoracic Surgery (EACTS) guidelines (1). In 2003, Casselman et al. demonstrated that mitral valve repair could be done safely and effectively using a classic endoscopic approach through a right mini-thoracotomy (2). Classic endoscopic repair shortens hospital and intensive care unit (ICU) stay compared to open sternotomy, and also confers a lower risk of postoperative bleeding, a shorter time to extubation, fewer transfusions, and less postoperative pain (3,4). Classic endoscopic techniques have been shown to be comparable in quality and durability compared to conventional sternotomy. Transthoracic aortic clamping and endo-balloon aortic occlusion both with antegrade and retrograde cardioplegia, along with hypothermic fibrillatory arrest, are all acceptable strategies for classic endoscopic mitral surgery (3,4).

From 2011 to 2020, 786 patients underwent minimally invasive mitral surgery, from which we were able to generate 62 matched pairs, totalling 124 patients. Statistical analysis was performed using STATA 13.0 software (StataCorp LP, College Station, TX, USA). Variables are listed as mean ± standard deviation (SD) or median and interquartile range (IQR) according to distribution. Descriptive analysis was performed using Student’s t-tests for continuous variables, and χ2 tests for categoric variables. Significance was defined as a P value of less than 0.05. 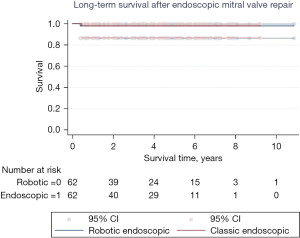 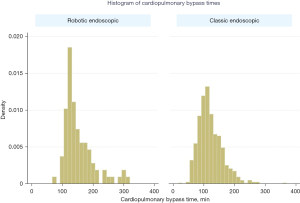 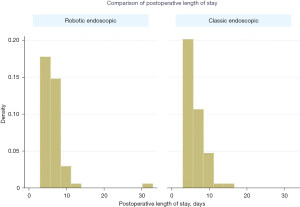 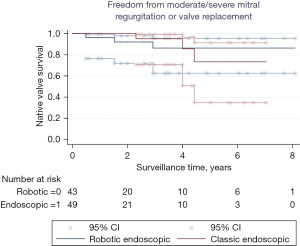 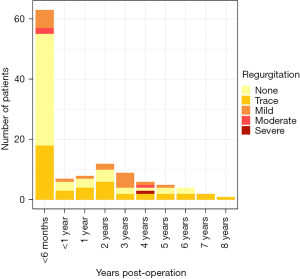 Figure 5 Incidence of mitral regurgitation at latest post-operative echocardiogram. Less than 10 patients per year post one year due to lack of consequent follow-up data regarding echocardiography.

Differences in mitral valve repair technique in this series are probably related to surgeon preference, as some surgeons who prefer partial annuloplasty and chordae tend to perform robotic endoscopic operations. Our operative outcomes suggest that index mitral valve surgery via a classic endoscopic approach yields similar clinical outcomes when compared to robotic endoscopic surgery. There was no difference in mortality across either cohort. Robotic endoscopic surgery was found to be associated with a significant increase in CPB duration. Freedom from moderate or severe mitral regurgitation or mitral valve replacement at last echocardiogram did not significantly differ between the two cohorts. A 2010 study of minimally invasive mitral surgery based on the STS database documented a twofold increase in the risk of stroke with less invasive mitral surgery but did not observe any difference in robotic endoscopic vs. non-robotic endoscopic minimally invasive surgery (12). This is thought to be due to retrograde systemic perfusion, and many centers including our own now use systematic CT imaging of the entire thoracic and visceral vasculature to screen out patients with significant aortic calcification and penetrating ulceration. We anticipate further reduction in our rate of clinical stroke, noting a stroke rate of zero percent annually after 2016 in either cohort.

Our study is potentially limited by several factors. This report describes the experience of a high-volume institution, and it may be difficult to extrapolate these results to other centers. This is a retrospective report and we have limited long-term follow-up. We have described short-term outcomes without comparing patients undergoing traditional median sternotomy. It is also possible that patients developed valvular degeneration outside of our follow-up period. Our analysis only included freedom from recurrent mitral regurgitation at the 10-year mark without further long-term data. Furthermore, patients with more challenging mitral pathology, including those with significant annular calcification, endocarditis, and other challenging pathologies are not well represented within our cohort as they may not be best served by minimally invasive techniques. Furthermore, while previous studies have demonstrated the safety and efficacy of concomitant procedures during minimally invasive mitral surgery, only one patient in our cohort underwent a concomitant tricuspid repair (16). Patients requiring atrial fibrillation ablation procedures, or tricuspid repairs at the time of mitral surgery may also undergo concomitant procedures via classic endoscopic or robotic endoscopic approaches.