Minimally invasive mitral valve surgery (MIMVS) using various approaches was first performed in the second half of the 1990s by different surgical teams (1-3). Thereafter, a growing number of technological improvements have made MIMVS safe, easier and routinely performed in several experienced centers.

Femoral vessel cannulation was progressively performed through smaller incisions and minimal dissection limited to the anterior face of the vessels. More recently, percutaneous femoral vessel cannulation became possible using closure devices with several potential advantages. Percutaneous femoral vein cannulation is technically easy and already widely used in many surgical and interventional procedures. On the arterial side, the closure of the vessel is more difficult, requiring a specific closing device. Prostar (Abbott Vascular, Abbott Park, IL, USA), a percutaneous arterial access closure device, consists of a sheath containing four needles connected to two braided sutures. It has proven to be safe and efficacious in the setting of endovascular treatment of thoracic and abdominal aortic aneurysms (4-6) and transcatheter aortic valve implantation (TAVI) (7-9). Our surgical team has already reported its application in the setting of MIMVS (10).

The aim of the present study is to describe the utilization of a total percutaneous femoral vessels cannulation technique during video-assisted MIMVS among 300 consecutive patients, with particular emphasis on cannulation results, its success rate and potential complications.

We performed a retrospective observational analysis of our experience with the total percutaneous femoral vessel cannulation technique in over 300 consecutive MIMVS patients. Our hospital Institutional Review Board approval was obtained. Written informed consent for every data analysis was not obtained since according to French legislation, this observational study did not modify existing diagnostic or therapeutic strategies. Demographics, preoperative, intraoperative and postoperative data were retrieved and collected from our patients’ medical charts.

The primary endpoint of our study was the rate of femoral vessels and/or groin complications. Success rate at the femoral artery access site was defined as an adequate hemostasis assured by Prostar deployment without the need for surgical or interventional correction. Continuous variables were expressed as mean ±1 standard deviation. Categorical variables were expressed as counts or percentages.

Under general anesthesia, infra-inguinal puncture carefully targeted the anterior wall of the mid-common femoral artery before venous cannulation to avoid arterial puncture under systemic heparinization. A guidewire was introduced and the correct position verified in the descending aorta with transoesophageal echocardiography (TOE). Heparin was administered to the patient. Blunt dissection of the subcutaneous tissue all the way down to the femoral artery with a mosquito clamp is of utmost importance to allow a perfect introduction of the Prostar (Figure 1). Subsequently, an arterial cannula (usually 17 Fr; Maquet, Orleans, France) was inserted. 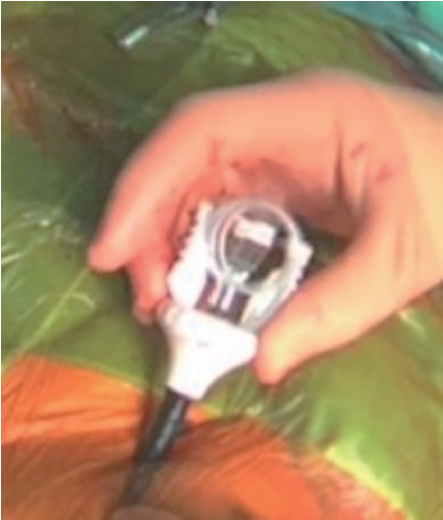 The percutaneous venous cannulation was performed on the contralateral side (usually the right) to reduce the risk of arterio-venous fistula (Figure 2). We utilized a 23/25 Fr two-stage single cannula (Estech Inc., Danville, CA, USA) placed up to the superior vena cava using TOE guidance, with satisfactory venous drainage achieved using a centrifugal pump (Medtronic Biomedicus, Eden Prairie, MN, USA). After the end of the procedure and cannula withdrawal, venous and arterial access were closed by skin purse-string stitch and Prostar dual stitch, respectively. 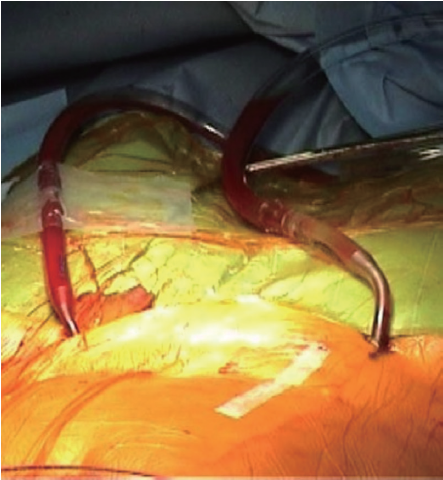 Figure 2 Total percutaneous femoral vessels cannulation technique with the arterial cannula on the left side of the patient and the venous cannula on the right side.

The surgical access was represented by an antero-lateral minithoracotomy (3-5 cm) through the fourth right intercostal space. The optique was introduced in the same intercostal space at the level of the mid axillary line while the transthoracic aortic clamp was placed via the fifth intercostal space (Figure 3). Intraoperative images of the camera (10 mm, 30° endoscope) were recorded and projected on two monitors in order to allow good visualization by each surgeon. Cardioplegia was delivered directly into the ascending aorta. 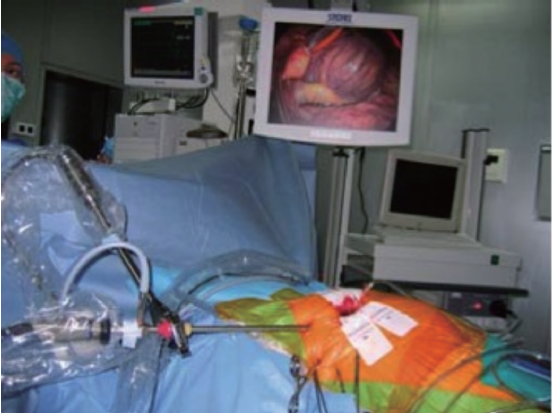 At the end of the surgical procedure, after cardiopulmonary bypass weaning, the venous cannula was removed first. Local hemostasis was obtained with a simple skin stich and manual compression on the right groin. On the other side, after protamine administration, the left femoral cannula was removed and artery closure was assured by pulling down the two braided sutures of the Prostar (Figure 4). During this maneuver, it is very important to irrigate the sutures in order to help slide the knot down. A 24-hour compression was applied on both sides. 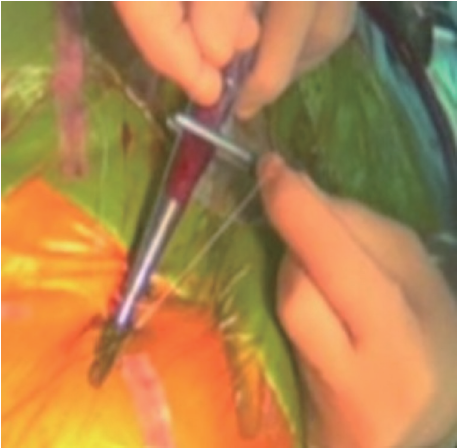 From October 2008 to December 2012, 300 patients were operated on for MIMVS at our institution. Mean age was 62.9±16.4 [26-93] years with a predominance of males (60%). Indications for operation were: mitral regurgitation leading to mitral valve repair (93%), mitral stenosis or non dystrophic mitral regurgitation leading to mitral valve replacement (7%).

Given that the only venous cannulation complication was an arterio-venous fistula at the beginning of our experience, we now avoid the puncture of both vessels on the same side. Two patients were converted to standard sternotomy due to difficult progression of the guidewire in calcified arteries. The complications on the arterial side were:

There were no postoperative bleeding complications. No other complications linked to the femoral cannulations (infection, lymphocele or significant hematoma) occurred during the follow-up. The percentage of uneventful arterial cannulations was 80% among the first 50 patients (N=10 out of 50) and 98.8% thereafter (N=3 out of 250).

MIMVS offers a less invasive approach to our patients suffering from mitral valve disease. The technical advances introduced in this field since the second half of the 1990s have meant that the results and outcomes are at least comparable to those of standard mitral valve surgery performed via median sternotomy as highlighted in a large meta-analysis including more than 13,000 patients (14). Moreover, among these innovations, percutaneous femoral vessels cannulation improves patient cosmesis and satisfaction. Here, we concentrate our report on percutaneous femoral vessels cannulation technique in a single-center series of 300 consecutive MIMVS patients.

The success rate in term of adequate hemostasis at the arterial access site was 95.8%, which is comparable with previous studies utilizing the same percutaneous closure device (5,7,9). In a recent literature review analyzing the efficacy and safety of Prostar in the setting of percutaneous endovascular aortic aneurysms repair, the weighted average success rate in term of access site was calculated as 91%, however it included various studies with different endpoint definitions (4). Some authors have highlighted the role of ultrasound-guided femoral artery puncture in order to improve the success rate at the access site (15-17), we find that this technique is helpful in complex cases like severe obesity, but is not necessary on a daily basis.

The impact of the learning curve on the success rate at the access site has been clearly demonstrated in our analysis as the rate of uneventful cannulations increased from 80% in the first 50 patients to 98.8% in the following cases. Bechara et al. found a strong trend for decreasing failure rate over time (P<0.007) since the beginning of their percutaneous endovascular aortic aneurysm repair program. Moreover, they found that the predicted probability of closure failure decreased from 45% per patient at the time of the program initiation to 5% per patient at the end of the 30-month period (6). In a similar manner Hayashida et al. identified early center experience as a predictor of major vascular complications and Prostar failure using univariate and multivariate analysis in a prospective cohort of TAVI patients (8,18). It is essential to stress the importance of the learning curve as it can underestimate the potential benefits, especially in short/intermediate term studies.

Percutaneous femoral vein cannulation was easy with no preoperative, intraoperative or postoperative bleeding (besides minor postoperative hematoma) linked to the percutaneous venous cannulation. The safety of the utilization and management of large (up to 24 Fr) percutaneous venous cannulae has been previously outlined (19). Utilization of Prostar has also been described for the femoral vein closure, which in our experience is not mandatory. We can predict that the future development of percutaneous and trans-septal mitral valve repair using smaller puncture (18 Fr for Mitraclip instead of 24 Fr in our series) will be very safe in terms of vessel approach.

In our series we have not experienced any groin complications such as infection, significant hematoma or lymphocele. A recent literature review by Schmitto et al. showed that there is an additional risk of groin complications associated with standard surgical femoral vessels exposure in MIMVS and these complications account for morbidity unseen with conventional sternotomy (20).

Our study displays of course several limitations. Firstly, this is a single-center study which is retrospective and observational in design. We have no comparison with sternotomy in terms of procedural time, total hospital stay and time to ambulation recovery, which could help understand if MIMVS with percutaneous cannulation can effectively reduce resource requirement and if so, lead to cost savings for public healthcare.

In conclusion, total percutaneous approach is particularly adapted to the concept of less invasive cardiac surgery with a high success rate after a short learning curve. With the advent of the percutaneous approach, the traditional complications of the groin incision have completely disappeared with no groin infection, lymphocele or significant hematoma.