Sublobar resection for intentionally treating patients with small non-small cell lung cancer (NSCLC) who are able to withstand lobectomy has remained highly controversial, although lobectomy is considered a standard procedure even for sub-centimeter lung cancers. The Lung Cancer Study Group (LCSG) revealed a three-fold increase in local recurrence rates and poorer survival in patients who had undergone sublobar resection rather than lobectomy in a singular randomized phase III study published in 1995 (1). The dogma that lobectomy is the standard of care for stage I NSCLC has been upheld until recently. However, several current investigations have found equivalent outcomes of sublobar resection and lobectomy when NSCLC are ≤2 cm (2-7).

Sublobar resection consists of segmentectomy and wedge resection, which are quite different from each other as curative surgery for lung cancer, since segmentectomy is more likely to provide sufficient margins and allows access to subsegmental and hilar lymph nodes. The present study retrospectively compared the outcomes of segmentectomy, not wedge resection and lobectomy among patients with clinical stage IA lung adenocarcinoma, and adjusted for clinical factors to minimize selection bias of patients. This analysis is an extended and updated version of our previous investigation (8).

We analyzed data from 634 patients who had undergone lobectomy and segmentectomy for clinical T1N0M0 stage IA lung adenocarcinoma since October 2005. All patients were assessed using high-resolution computed tomography (HRCT) and F-18-fluorodeoxyglucose positron emission tomography/computed tomography (FDG-PET/CT). Patients with incompletely resected (R1 or R2) or multiple tumors were excluded from the prospectively maintained database that was analyzed herein. All patients were staged according to the TNM Classification of Malignant Tumors, 7th edition (9). Platinum-based chemotherapy was administered to patients with pathological lymph node metastasis after surgery. The institutional review boards of the participating institutions approved the study and the requirement for informed consent from individual patients was waived because the study was a retrospective review of a database. Chest images were acquired by multi-detector HRCT independently of subsequent FDG-PET/CT examinations. Tumor sizes and maximum standardized uptake values (SUVmax) were determined by radiologists at each institution. Because of the heterogeneity of PET techniques and performance, we corrected inter-institutional errors in SUVmax resulting from PET/CT scanners of variable quality based on outcomes of a study using an anthropomorphic body phantom (NEMA NU2-2001, Data Spectrum Corp, Hillsborough, NC, USA) that conformed to National Electrical Manufacturers Association standards (10). A calibration factor was analyzed by dividing the actual SUV by the gauged mean SUV in the phantom background to decrease inter-institutional SUV inconsistencies. Postoperative follow-up of all patients from the day of surgery included physical examinations and chest X-rays every three months, as well as chest and abdominal CT and brain MRI assessments every six months for the first two years. Thereafter, the patients were assessed by physical examinations and chest X-rays every six months, and annual CT and MRI imaging.

Data were analyzed using the Statistical Package for the Social Sciences software version 10.5 (SPSS Inc., Chicago, IL, USA). Continuous variables were compared using t-tests and Mann-Whitney U tests in all cohorts and Wilcoxon tests for propensity-matched pairs. Frequencies of categorical variables were compared using the χ2 test and propensity-matched pairs were analyzed using McNemar tests. Propensity score matching was applied to balance the assignments of the included patients and to correct for the operative procedures (lobectomy or segmentectomy) that confounded survival calculations. The variables of age, sex, tumor size, SUVmax, side and lobe were multiplied by a coefficient that was calculated from logistic regression analysis, and the sum of these values was taken as the propensity score for each patient. Lobectomy and segmentectomy pairs with equivalent propensity scores were selected by a 1-to-1 match.

Of the 634 patients analyzed in this study, 479 and 155 underwent lobectomy and segmentectomy, respectively (Table 1). Patients with large tumors, right-sided tumors, pathologically invasive tumors, (presence of lymphatic, vascular, or pleural invasion), high SUVmax, and lymph node involvement were significantly more often treated by lobectomy. However, age and gender did not differ significantly between the two procedures. Table 2 shows the segments that were removed during segmentectomy. 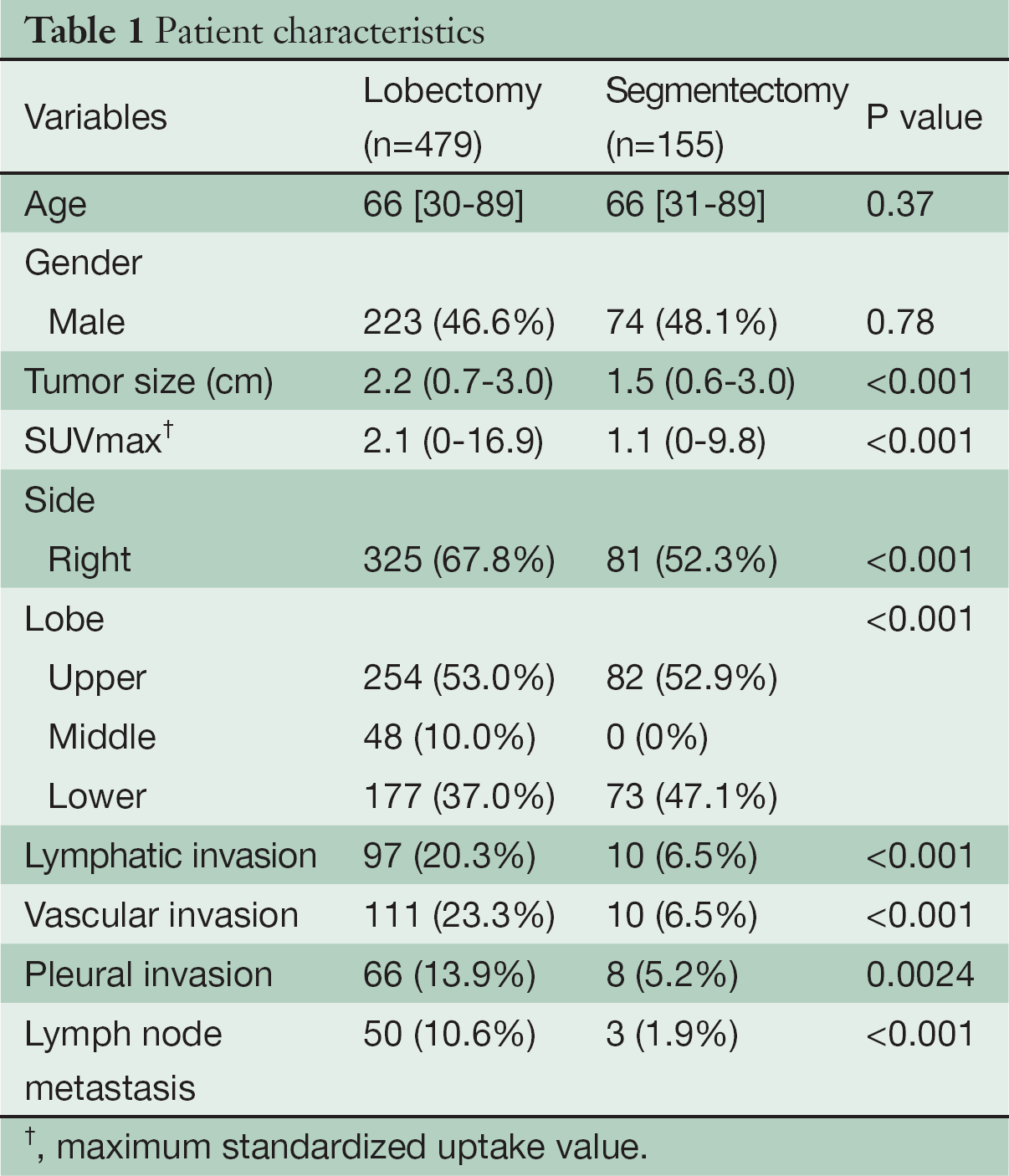 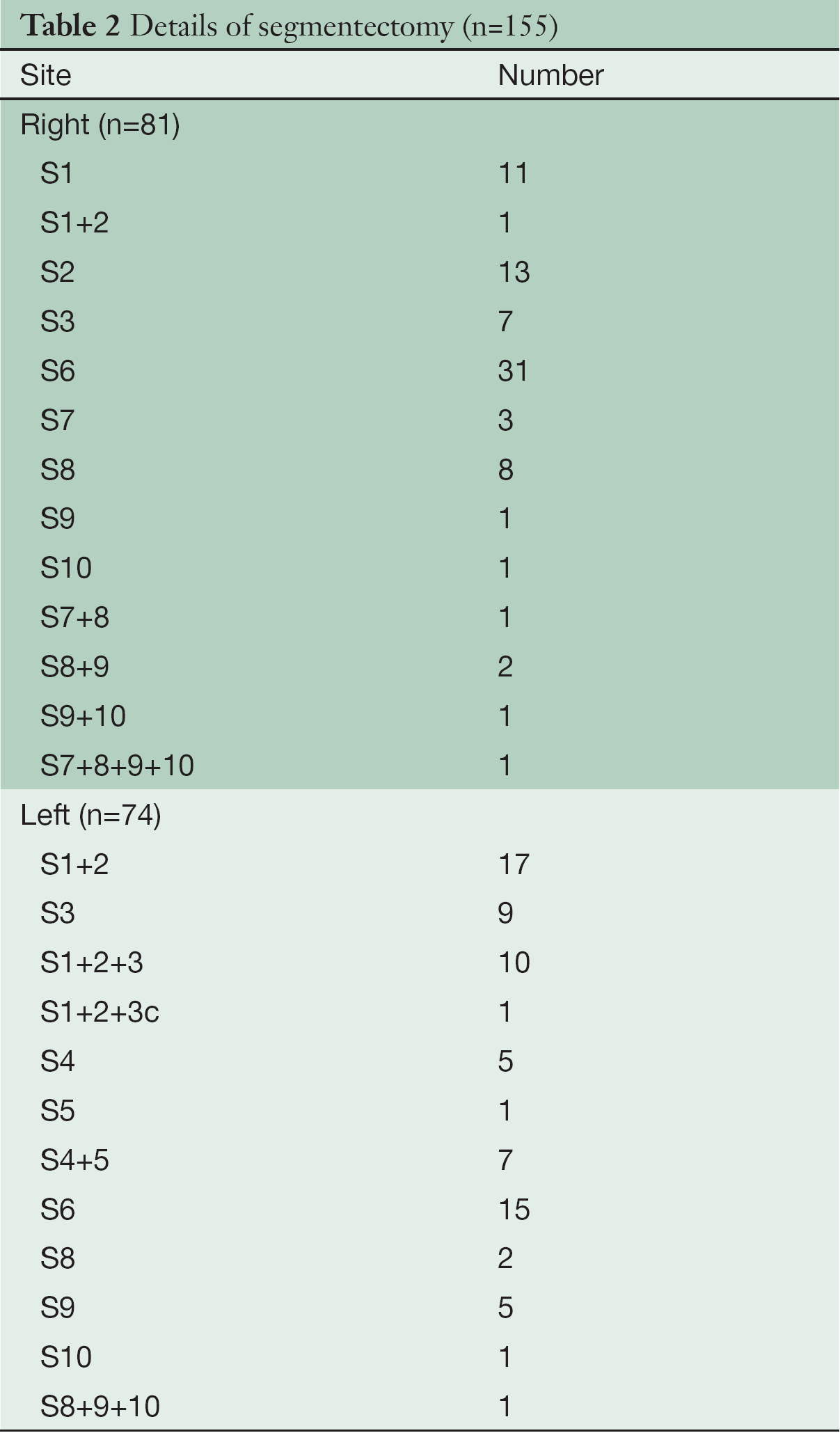 The 3-year OS rates between patients who underwent lobectomy and segmentectomy were similar (94.1% vs. 95.7%, P=0.162), whereas three-year RFS rates significantly differed (86.9% vs. 92.7%, P=0.0394; Figure 1). Table 3 shows that the multivariate analyses of RFS and OS selected age and SUVmax as significant independent prognostic factors, but not sex, tumor size, or procedure (lobectomy vs. segmentectomy). 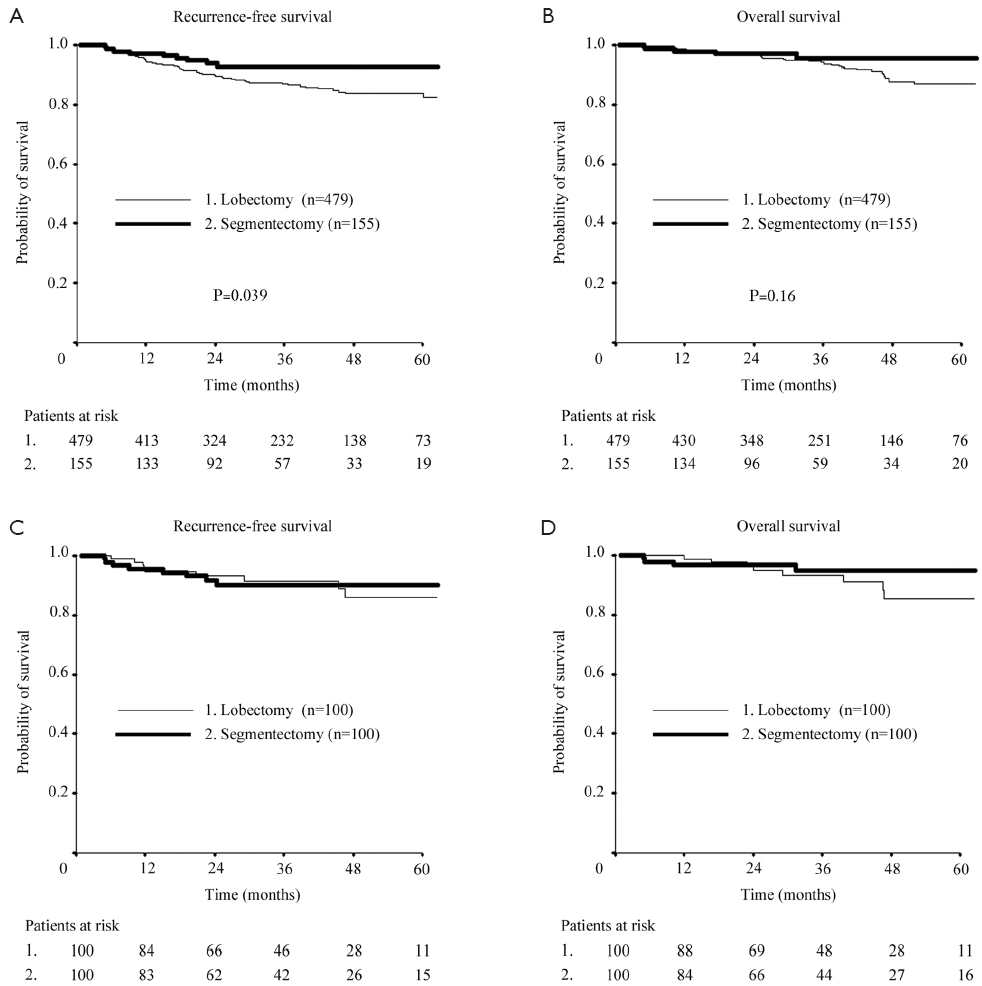 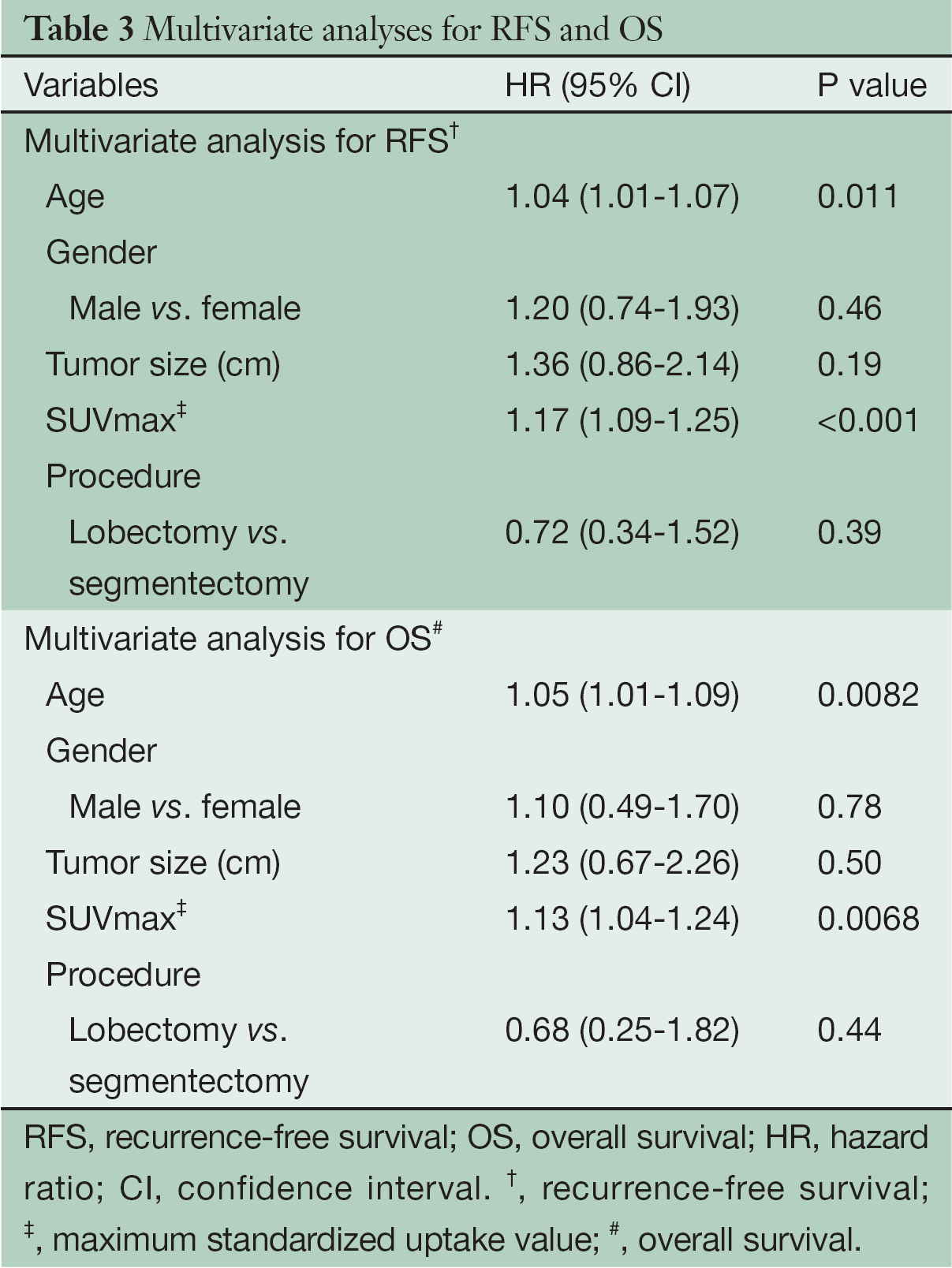 Propensity score-matching based on clinical variables of age, gender, tumor size, SUVmax, side and lobe, allowed good matches of 100 lobectomy and segmentectomy pairs in terms of clinical and consequently pathological factors, except for more advanced age and higher SUVmax in the segmentectomy group (Table 4). Patients who underwent middle lobectomy were excluded from matching for a fair comparison, since tumors located in a middle lobe were never treated by segmentectomy. Figure 1 shows that the three-year RFS and OS did not significantly differ between propensity score-matched patients after lobectomy or segmentectomy (91.5% vs. 90.2% and 93.3% vs. 94.8%, respectively). 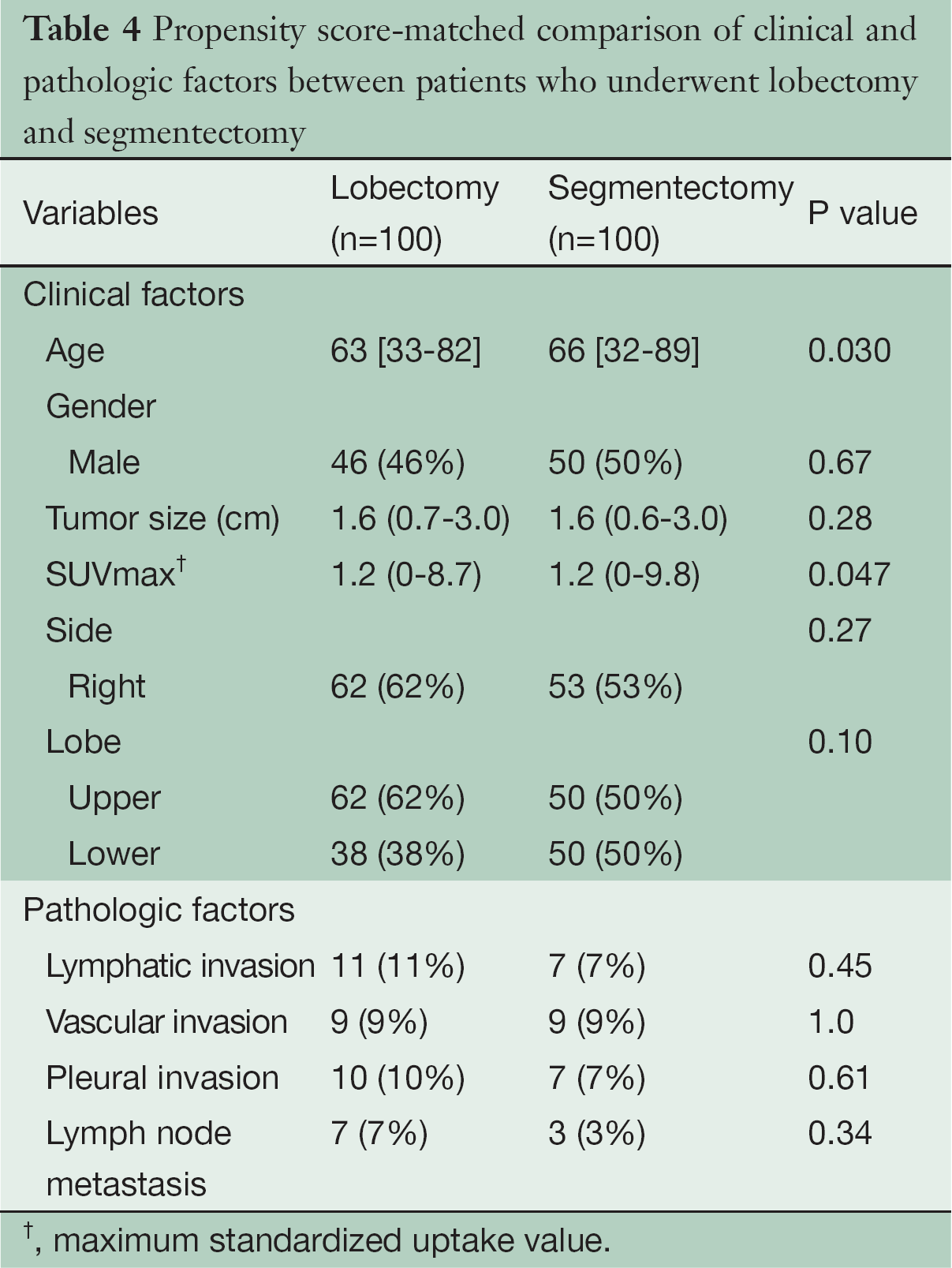 The RFS and OS curves of patients with clinical stage IA lung adenocarcinoma seemed better after segmentectomy than lobectomy, although the clinical and pathological backgrounds significantly differed and would obviously affect their survival (11-16). Multivariate analyses of the clinical background for RFS and OS demonstrated that procedure (lobectomy vs. segmentectomy) was not a significant prognostic factor. The clinical features or pathological factors of lymphatic, vascular or pleural invasion, or lymph node metastasis were similar in propensity score-matching analyses that matched for potentially confounding variables of age, sex, tumor size, SUVmax, tumor location to minimize selection bias. Only age and SUVmax significantly differed. The three-year RFS and OS rates after segmentectomy and lobectomy group were similar in the matched model, although the former were significantly older and had a higher SUVmax. These data suggest that segmentectomy could be an alternative strategy for treating clinical stage IA lung adenocarcinoma when HRCT and FDG-PET/CT findings are taken into consideration.

This investigation has several limitations and the results should be interpreted with care. Information in the database analyzed herein included surgical procedures; however, further details such as indications for segmentectomy—that is, whether or not patients who were treated with segmentectomy could have tolerated lobectomy—are difficult to obtain. In addition, patients who underwent segmentectomy tended to have less invasive, smaller tumors, with small tumor size or low SUVmax, and thus a lower frequency of pathologically invasive factors such as lymphatic, vascular, pleural or nodal involvement. Therefore, we used propensity score-matched analysis to adjust the patients’ backgrounds as much as possible. However, we could not compare the surgical outcomes of patients with a relatively low SUVmax, implying that patients with a high SUVmax require close scrutiny. The database also did not include information about lung function. The key advantage of segmentectomy is the preservation of lung function, and several studies have shown that segmentectomy has functional advantages over lobectomy (5,17,18).

The target tumors of most previous studies that compared the outcomes of segmentectomy and lobectomy were T1 N0 M0 NSCLC of ≤2 cm (4-6). However, the present study included patients with clinical T1b tumors of 2 to 3 cm. Patients with T1b lung adenocarcinomas with a sufficient surgical margin could be candidates for sublobar resection if selected based on HRCT and FDG-PET/CT findings (12).

The ongoing, multicenter phase III clinical trials of propriety of radical segmentectomy in the United States (CALGB-140503) and Japan (JCOG0802/WJOG4607L) should be carefully monitored. The primary end-point of the Japanese study is OS (disease-free survival in the US study), and wedge resection is not permitted as a sublobar resection, as it differs from radical segmentectomy. The Japanese study (19) aims to compare the surgical outcomes of lobectomy and segmentectomy for T1 N0 M0 NSCLC measuring ≤2 cm, excluding radiologically less-invasive tumors such as ground-glass opacity (GGO)-dominant tumors on HRCT (20), and thus can show the true colors of segmentectomy compared with lobectomy. Segmentectomy is more procedurally demanding than either lobectomy or wedge resection, and thus incorrect outcomes of these clinical trials due to technical errors, such as recurrence at resection lines or excessive loss of lung function, might be a concern. Surgeons must carefully avoid local failure at the margin and fully expand adjacent segments to maximize postoperative lung function.

Current understanding of radical segmentectomy can be summarized as follows. Firstly, the indication for segmentectomy should be limited to T1 tumors ≤3 cm in diameter, and HRCT and PET-CT findings must be taken into consideration, particularly for T1b tumors (21-23). Whenever nodal involvement or an insufficient margin is confirmed intraoperatively, segmentectomy should be converted to lobectomy with complete nodal dissection. Secondly, radical (intentional) and compromising indications for segmentectomy must be independently discussed. The former is for low-risk patients who can tolerate lobectomy. Thirdly, segmentectomy is more valuable than wedge resection from an oncological perspective because it allows nodal dissection at the hilum. Thus, the decision of the most suitable procedure, such as whether or not to intraoperatively convert to lobectomy, should consider precise staging and the lower rate of local recurrence resulting from sufficient surgical margins. Therefore, segmentectomy must be clearly separated from wedge resection amongst the categories of sublobar resection for lung cancer. Surgeons must become adept and master segmentectomy as a keynote procedure because small lung cancers are being detected with increasing frequency.